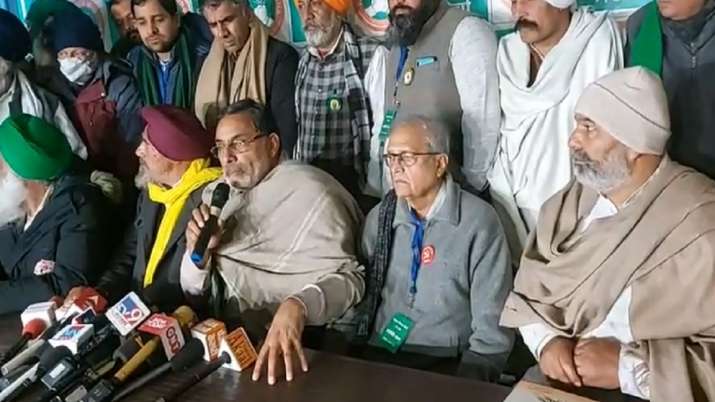 New Delhi: After the agreement between the farmer and the government on agricultural laws and other demands, the farmers’ movement was postponed, but the United Kisan Morcha has expressed displeasure with the government on Saturday. In the review meeting held by the front, the farmers have taken some big decisions, stating the strategy ahead. While holding a press conference after the meeting on Saturday, it was said on behalf of the United Kisan Morcha that no action has been taken regarding litigation and compensation in any state except Haryana, so we will celebrate January 31 as Khilafi Diwas.

Farmer leader Rakesh Tikait said on Saturday that the incident that happened in Lakhimpur Kheri, we will go there for 3-4 days from 21st. There he will meet the victims. We will also meet the farmer who is in jail. Farmer leader Yudhveer Singh said that after the end of the agitation, during the review of the promises of the government today, it was realized that the government has not formed any committee on MSP, no contact has been made with the farmers’ organizations. The government also did not fulfill its promise to withdraw the cases registered against the farmers. He said that except Haryana, none of the other states have taken back the cases registered against the farmers and have not made any announcement regarding compensation.

Yudhveer Singh said that therefore the farmers will once again demonstrate and burn effigies at district headquarters, block headquarters and tehsils across the country on January 31 against the government’s disobedience. Even after this, if the government does not talk, then it continues to take a more obstinate attitude, then Mission UP will be started from February 1.

Apart from this, the farmers have also discussed the Lakhimpur Kheri issue in the meeting. The farmers are angry that the government has not sacked the minister yet, because the government is concerned about the vote bank, while 302 have been put in jails on the victim farmers. He further informed that, therefore, on January 21, a delegation of United Kisan Morcha under the leadership of Rakesh Tikait will leave for Lakhimpur Kheri. After this, the victims will also meet the officials. Apart from this, if the matter is not heard, then from there a firm front will be started and that front will remain till justice is not received.