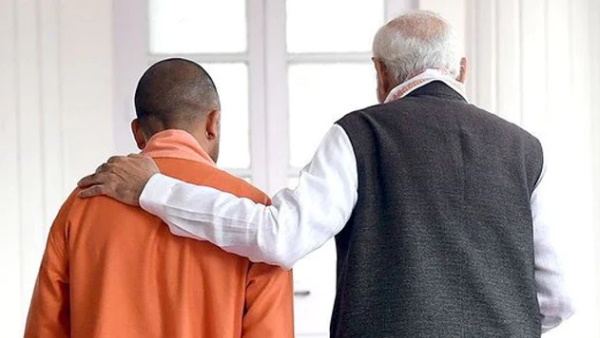 New Delhi, 25 November: Recently, a photo of PM Modi talking on social media with his hand on the shoulder of UP CM Yogi Adityanath became very viral. In this photo, PM Narendra Modi is placing his hand on Yogi Adityanath’s shoulder and it seems that he is explaining something to the CM of UP. After which people had made many guesses about this photo. Now Defense Minister Rajnath Singh has made a big disclosure about this photo.

Defense Minister Rajnath Singh told in the booth president’s conference held in Sitapur on Thursday that a few days ago, CM Yogi Adityanath had tweeted a photo of himself and Prime Minister Modi, in which the PM was telling him something by placing his hand on his shoulder. He said that people got upset as soon as the photo went viral, what did they say in Yogi ji’s ear. Rajnath Singh told that the PM said that Yogi ji should bat fast. Play hard. Victory is certain. Rajnath has also made a tweet regarding this.

As soon as the picture of PM Modi and CM Yogi was revealed, after this Congress and Samajwadi Party attacked Yogi Adityanath. Former Chief Minister Akhilesh Yadav had said in a sarcastic tone that ‘Have to keep a hand on the shoulder with remorse, one has to walk with a few steps’. Significantly, in terms of population, the assembly elections to be held in the country’s largest state UP next year are being considered like the first ‘semi-final’ of the general elections-2024.

What did PM Modi say by placing his hand on CM Yogi’s shoulder? Rajnath Singh disclosed