HomeNational NewsViral Video: Elephants did such breakfast, you will also be surprised to...
National News

Viral Video: Elephants did such breakfast, you will also be surprised to see the video 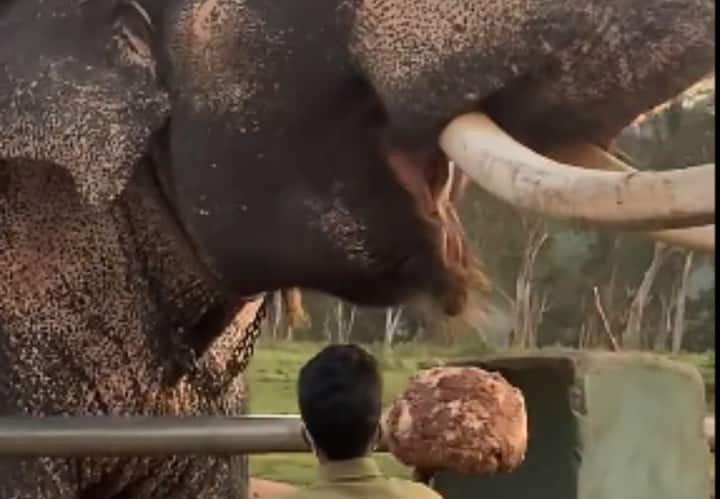 Many healthy things are found in the breakfast being served for the elephants in Mudumalai Tiger Reserve. It is being told that the elephants are fed ragi, jaggery and rice mixed with a little salt early in the morning. These food items are mixed together and a big ball is prepared. After this, the members of the kitchen go to the elephant and put it directly in the mouth. IAS officer Supriya Sahu has also written this while tweeting.

Users raising questions on this video
On Tuesday, Supriya Sahu shared the video of preparing breakfast and feeding the elephant. The 49-second video has been viewed more than 50,000 times and has received thousands of likes. In the same, there are some social media users who are asking questions about keeping elephants in captivity.

elephants are not caged
On the subject of elephant captivity, information has come out that there are no elephant captives in the 100-year-old Theppakadu camp. They are allowed to roam in the forest area near the camp, but are still given special food twice a day by tourists visiting the Mudumalai Tiger Reserve.

Breakfast time for elephants at Theppakadu Elephant Camp in Mudumalai Tiger Reserve in Tamil Nadu.Each elephant has a defined menu carefully curated by the camp Veterinarian.Ragi jaggery rice are mixed with some salt and given as food balls to waiting elephants outside #elephant pic.twitter.com/fJg6xJYXX0

Elephant feeding program is open daily for tourists from 8.45 am to 9.15 am and from 5.45 pm to 6.15 pm. According to the Theppakadu camp’s website, these elephants are trained by experienced mahouts and used for forest patrolling, eco-tourism purposes.

Read this also: Breaking News Live: Pinky Irani arrested in Sukesh Chandrasekhar case, ‘Mahatag’ and Jacqueline were made to meet

IND vs BAN: Rohit will not play third ODI, these 2 players were also out of the last match