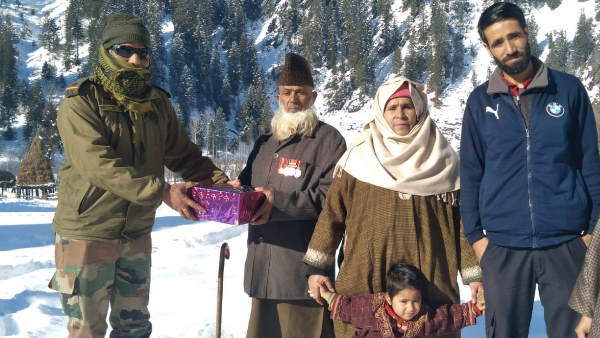 Srinagar, January 14: On the occasion of Armed Forces Veterans Day, the Indian Army on Friday honored its oldest war hero Mia Gul Khan. In Machil sector of Kashmir, Mia Gul Khan met the soldiers and congratulated them on Veterans Day. He was also honored by giving gifts from the soldiers of the army.

Mia Gul Khan, a 73-year-old rifleman of the Indian Army, retired 40 years ago. He is the oldest war hero. During this, he said that the way the Indian Army is protecting the people and borders of the country in every situation, the amount of thanks to be said for it is less. Veterans Day is celebrated on 14 January in honor of Field Marshal KM Cariappa, the first Commander-in-Chief of the Indian Army.

Veterans Day is celebrated in memory of the incomparable contribution made by Field Marshal KM Cariappa, the first Commander-in-Chief of the Indian Armed Forces. Field Marshal Cariappa retired on this day in 1953. On this day, in honor of the selfless service and sacrifice of army heroes and ex-servicemen to the nation and to show their solidarity towards their families, along with the program of laying flowers at various military bases of the country, programs for ex-servicemen are organized.

Many children hospitalized due to viral ‘One Chip Challenge’ on social media, know what it is