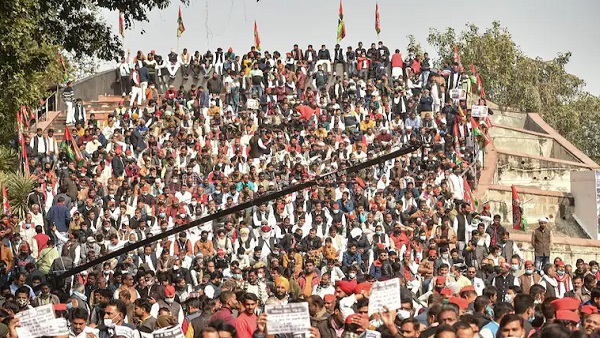 Lucknow Police Commissioner DK Thakur said, “Today we got information that around 2500 people gathered at the Samajwadi Party’s office. According to the election code of conduct, no rally, meeting can be held till January 15. Our team reached there and saw the program and on the basis of violating the Kovid-19 protocol, we have registered a case.

The Lucknow Police Commissioner said that an FIR has been registered against around 2,500 Samajwadi Party leaders under sections 188, 269, 270 and 341 of the Indian Penal Code (IPC) along with relevant sections of the Epidemic Diseases Act. The city police chief said video evidence was obtained before the FIR was registered in this regard. Visuals from the ‘Virtual Rally’ show Lucknow Police clearing a crowd gathered outside the SP’s office for violating the COVID-19 protocol.

Lucknow Police Commissioner DK Thakur had said earlier in the day that the city police was being deployed wherever people were gathering in large numbers in violation of the Election Commission’s orders. “We got information about a crowd gathering outside the SP office on social media and police personnel were sent to clear the crowd,” he said.

Lucknow District Magistrate Abhishek Prakash told India Today that the Samajwadi Party’s virtual rally took place without prior permission, DM Prakash said, “On receiving the information, the police team and the magistrate were sent to the SP office. Action will be taken on the basis of their report.”

SP said – we did not call anyone, people had come

Samajwadi Party’s Uttar Pradesh unit chief Naresh Uttam Patel said, “It was a virtual incident inside our party office. We did not call anyone but people had come. People work by following the COVID-19 protocol. ” Targeting BJP, Naresh Uttam Patel said, BJP ministers were crowded at doors and markets too, but they have a problem with us.” After seeing this, a ban on physical rallies was announced.