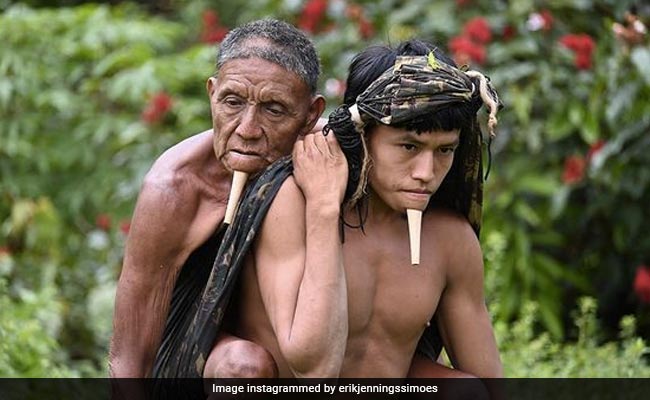 To get the Kovid vaccine, the man walked with his father on his back for 6 hours

An indigenous man carrying his father on his back to get the COVID-19 vaccine in the Brazilian Amazon is going viral on social media. In the picture, 24-year-old Tawi is seen carrying his 67-year-old father on his back when both of them were vaccinated. Tavi walked with his father for 6 hours to reach the vaccination site and then another 6 hours to return.

Dr Eric Jennings Simoes, who clicked the viral picture, said that Wahoo could hardly see anything and could barely walk due to chronic urinary problems.

Dr Simos told BBC News Brasil: “It was a very beautiful testament to the lovely relationship between them.” Although the picture was shot in January 2021 when the vaccination campaign against COVID-19 began in the country, Dr Simos posted it on Instagram on January 1 this year. The doctor called it “the most remarkable moment of 2021”.

The viral picture is a symbol of just how complicated a vaccination campaign is in one of the world’s most remote regions. Tawi and Wahoo are from the Zo’ae indigenous community. The community lives in relative isolation in dozens of villages in northern Para state.

When the vaccination campaign began in Brazil, indigenous people were considered a priority group. If officials went to each village, they were so far away that it would have taken weeks to vaccinate everyone. A vaccination system was agreed with the communities through radio communication. Keeping in mind the culture and knowledge of the Zo’a people, huts were established in the forest.

According to official figures, 853 indigenous people have died due to Kovid-19 in Brazil. However, indigenous rights groups say the number is much higher. Wahoo died for reasons that remained unclear in September last year. Tawi lives with his family and recently got his third dose of the vaccine.

Election Live: Announcement of ‘AAP’ candidate for the post of CM in Punjab, PM will talk to the people of Varanasi