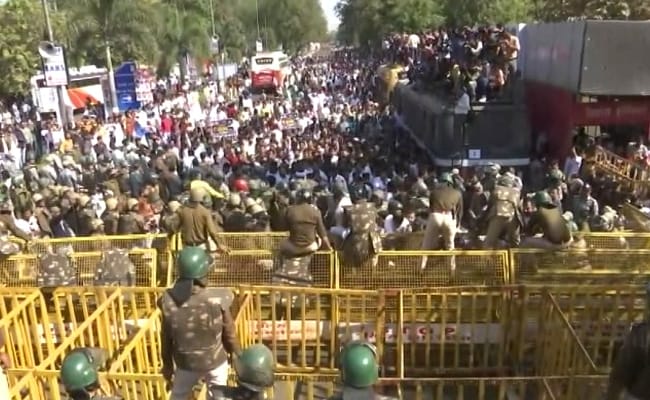 In Bhopal, the capital of Madhya Pradesh, thousands of students of NSUI came out on the road under the leadership of senior party leaders against the new education policy. During this, a clash was also seen between the students and the police. These students, who came from many districts of the state, were increasing to gherao the residence of Chief Minister Shivraj Singh Chouhan. NSUI claimed that students from all 52 districts of the state participated in the protest, including NSUI national president Neeraj Kundan. PCC chief Kamal Nath, former ministers PC Sharma, Lakhan Ghanghoria, MLAs Kunal Chaudhary, Vipin Wankhede and party’s youth leader Vivek Tripathi were also involved in the protest. The students said that the students belonging to Scheduled Castes and Scheduled Tribes are not getting their scholarships. Apart from this, he also pointed out other flaws in the new education policy being implemented in the state.

However, permission was not taken from the police for the demonstration. Around 1 pm, the students gathered at the Congress office on Link Road-1, Bhopal, from where they wanted to march to the Chief Minister’s residence in Shyamala Hills, 5 km from where they were stopped by the police outside the party office. Unable to stop them at the first barricades, the police resorted to mild lathi-charge.

Vivek Tripathi, President, Youth Congress Media Cell said, “We have started a nationwide campaign ‘Save Education, Save India’. The scholarship of SC-ST, OBC category children is irregular. The college administration pressurizes them for fees. Poor children are suffering in the situation. Education mafia is dominating in the state, distributing fake degrees, all the students wanted to meet the Chief Minister but the Chief Minister did not come. On the contrary, the students were lathi-charged. Police registered a case against them. Many students have been injured, are hospitalised.”

The education policy has been revised after 34 years. Under the new policy, regional languages ​​have also been included on a pilot basis. In class 10 and 12 board exams, students will have more number of multiple choice and analytical questions from 2022 onwards. Schools and higher education institutions will allow students to choose subjects based on their interest and aptitude.

A major change proposed in the education policy is to allow foreign universities to set up campuses in India and give full entry-exit flexibility to courses.