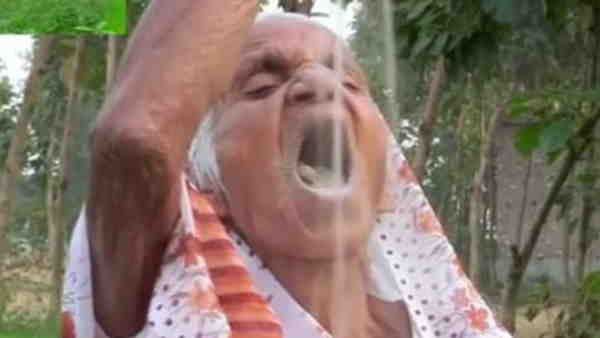 Varanasi, November 26: 75-year-old Kusumavati Devi has come into the limelight these days due to her strange talent. Yes.. you will also be surprised after knowing the skill of Kusumavati Devi and the reason behind it. Actually, Kusumavati Devi eats from one loaf to half a kilo of sand every day.

However, even after eating sand (sand), Kusumavati Devi is completely healthy and healthy. Villagers tell that even though Kusumavati Devi may not have breakfast in the morning, she definitely eats sand on time and that too of the Ganges. Kusumavati’s grandchildren also arrange for sand and she washes it clean and makes it edible.

Kusumavati Devi is not only a wonder for the area, but she is also well known for her health. Let us tell you, Kusumavati Devi runs a poultry farm and lives by building a house in a small part of the farm. He has two sons and these sons also have 3 children. There is a full-fledged family, but due to her stubbornness, Kusumavati Devi lives in a separate house.

According to the people of the village, they do not care how long this Kusumavati has been eating sand. But for the last 40-45 years, he has been seen eating sand three times a day. Kusumavati Devi says that if she does not eat sand, her health will deteriorate.

Also read:- Imam’s wife threatened to break the marriage, said- ‘I am a model girl, cut off my beard’