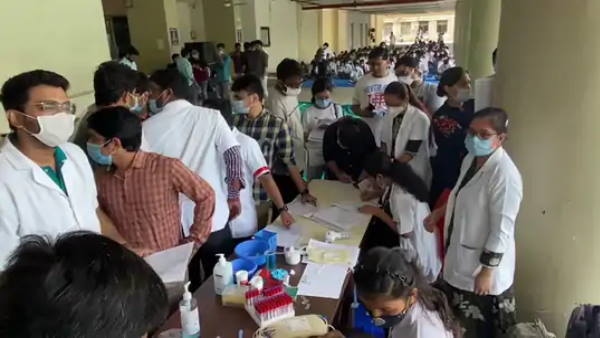 Chandigarh, An agreement has been reached between the government and HCMS doctors amidst a spurt in the infection of coronavirus in Haryana. After which the doctors withdrew their agitation. This information was given by the Public Relations and Information Department of the Government. It was said that the government has welcomed the decision of the doctors. At the same time, now doctors have started working in hospitals.

It is being said by the Health Department that, now in Haryana, immunization of adolescents in the age group of 15 to 18 years and booster dose is being given to the elderly above 60 years of age. People are being appealed to get the vaccine as soon as possible and stay safe themselves and also keep others safe. The Chief Minister also appealed on social media- “Let us fight against Corona together. Get the vaccine done as soon as possible and follow the Kovid-compliant behavior.”

In Madhya Pradesh, all schools up to class 12th closed till 31st January, CM Shivraj Singh Chouhan said – all meetings and fairs will also be banned

At the same time, the government has also put an end to the rumors of lockdown. Gurugram Deputy Commissioner Dr. Yash Garg said that, there is no possibility of lockdown in us right now. He said that the workers should not panic and keep doing their work. Putting an end to the rumors of lockdown in the district, Garg said that the situation of corona infection is still under control and there is no possibility of imposing a lockdown according to the current situation, so the general public, especially the workers, should not be worried, but take precautions.

Haryana government and HCMS doctors have reached an agreement, the movement of doctors has now come to a standstill