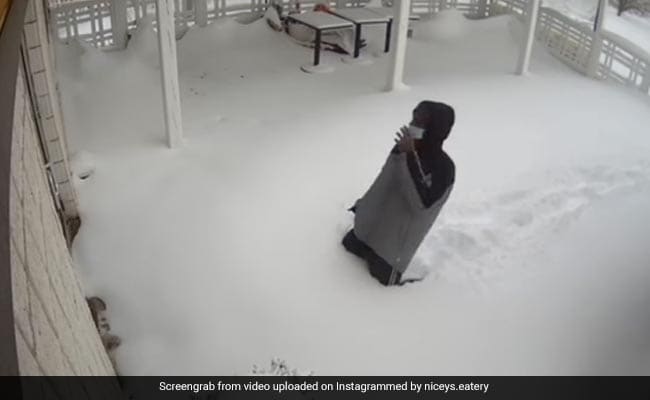 This video is becoming quite popular on social media.

Often you must have heard that food lovers are ready to do anything to eat their favorite food. But have you ever seen someone going to the restaurant in heavy snowfall? No, when the cold freezes even the blood of a person, then how can one even think of going out of the house. But sir, these days a man reached a restaurant in heavy snowfall to eat his favorite food. But after going there he saw that the restaurant was closed. After this the reaction he gave, now it has become viral on social media.

In the video which is going viral on social media, it can be seen that there is a white sheet of snow all around. At the same time, a person wearing a thick jacket, battling the cold, somehow reached the restaurant, but upon reaching here, he sees the door of the restaurant closed. The person is very disappointed to see the restaurant door closed. Seeing this disappointment, it is clear that due to the closure of the restaurant, he could not get his favorite food. That is why even in his gesture, he is showing the strength to eat the food of his choice.

As soon as this video was posted, people started registering their reaction with speed. Where another few people were seen praising this man’s passion. At the same time, some people were also calling the person seen in the video an idiot. As one user wrote after watching the video that I have certainly never seen such enthusiasm for my favorite food, which reaches the restaurant in the snow even in such cold weather, some other users said that such bad First of all in the season we should worry about our safety and not the food of any restaurant.

Also read: 1000 drones showed ‘Bharat Darshan’ in the sky – You will be surprised to see VIDEO

This video, which is becoming increasingly viral on social media, is being told from the city of Ontario, Canada. Let us tell you that this city is included in the coldest areas of the world. That’s why many people felt that the way a person reached the restaurant in such a severe cold, he is bound to be disappointed. The person seen in the video first showed his disappointment there after seeing the restaurant closed. After that he returned from there disappointed. Well now this video has become a topic of discussion in the internet world. This video has been shared by niceys.eatery from its Instagram page.

After the relief of the Center on petrol and diesel, these states also reduced the tax, know what are the new prices

BJP Hits Back Over Rahul Gandhi: BJP retaliated on Rahul Gandhi’s statement, said- Congress is carrying kerosene in hand since 1984