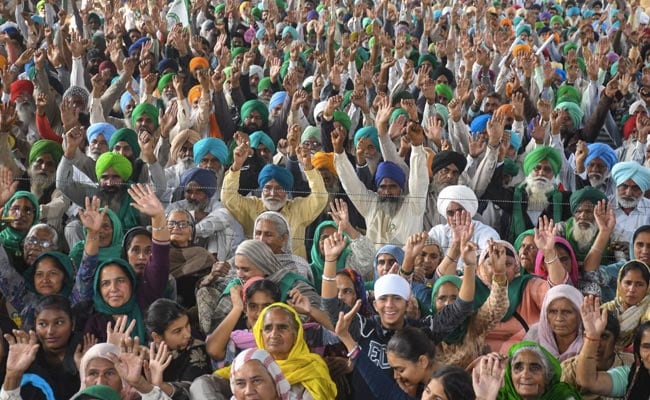 The farmers’ movement on all the borders of Delhi completed one year on Friday. In this one year, when farmers were accused of being terrorists, Khalistani, hundreds of farmers also died due to cold, accidents and diseases. Yet the farmers, despite facing everything, stood still in a peaceful manner. But in the end the satyagraha of the farmers turned the government down. Sandeep Kaur, 40, from Ludhiana, is bringing her 8-year-old daughter Sureet to show the farmers’ struggle that has been going on for the past one year. In the last one year, 8-year-old Sureet has spent Baisakhi, Diwali, Holi holidays among farmers, instead of going out somewhere, here on the Singhu border.

‘SKM’s banner is for farmers’ rights, there will be no politics in its name’: Yogendra Yadav to NDTV

At the same time, the Ghazipur border became buzzing again today. For the last few days, the number of farmers here was very less. It is obvious that when the movement goes on for 1 year, the number keeps getting smaller and more and the second is that this is the wheat sowing season, because of this also the farmers were giving more time in the field, but because today the farmers movement On completion of 1 year, farmers were seen gathering in large numbers on the Ghazipur border. But the question is whether the completion of one year of the farmers’ movement is a matter of happiness or concern for the farmers.

Farmer Satnam Singh says that what to say about happiness, but it can definitely be said that after at least one year, Modi ji has got some wisdom. These are the three black agricultural laws. Now he has decided to take it back. At least the farmers are happy that they have understood in their minds that the farmers are fighting for their very legitimate demand.

Central government could not fulfill the promises made to farmers at the time of elections: Gopal Rai

At the same time, according to farmer leader Rakesh Tikait, even though the announcement has been made to withdraw three agricultural laws, but till the MSP guarantee law is not made, the farmers who lost their lives during the agitation will not get compensation and the cases filed against the farmers during the agitation. If they are not taken back, till then the movement will continue.

Inderjit Singh, a resident of Sitarganj in Udham Singh Nagar district of Uttarakhand, and his family have been participating in the ongoing farmers’ movement on the Ghazipur border for the last one year. On 26 January, Inderjit Singh also went to ITO with his tractor. He says that the Delhi Police has registered three cases on charges of attempt to murder, damage to government property and conspiracy. To which his lawyer is giving the answer in the court. I went there and fired what, ate the police stick separately and we were in the forefront. We ourselves were told the way to go from here, go from there.

Rakhi Sawant gave the news even before the announcement of Bigg Boss, said in the video – I am out