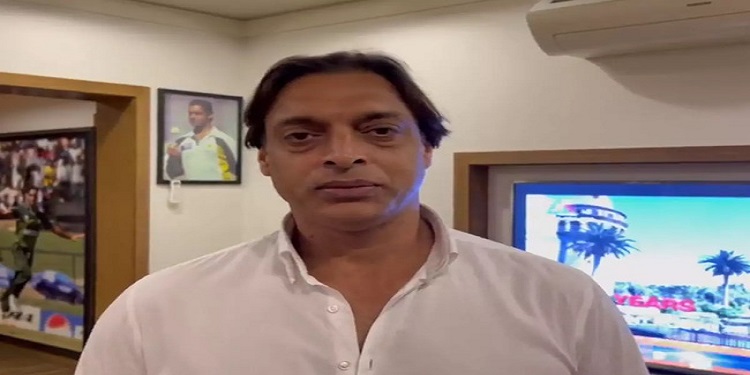 PTV: In the Shoaib Akhtar PTV controversy case of former Pakistan fast bowler Shoaib Akhtar, the channel has withdrawn the compensation claim against Shoaib from the Lahore Court. An out-of-court settlement was reached between former Pakistan fast bowler Shoaib Akhtar and PTV Sports anchor Dr Nauman Niaz during a meeting at the residence of Information and Broadcasting Minister Fawad Chaudhary. . Keep reading for the latest sports news Hindi.InsideSport.IN

Niaz had apologized to Shoaib
Last month, Akhtar’s “insult” on a state-run TV channel had sparked anger among cricket fans. The TV host had asked Shoaib Akhtar to leave his show in the presence of cricket legends like Sir Viv Richards and David Gower. Akhtar resigned on this. This was followed by a meeting at the residence of Broadcasting Minister Fawad Choudhary, Niaz apologized to Shoaib Akhtar for ousting him from the live show.

notice of recovery was sent
Shoaib Akhtar PTV controversy-PTV-Shoaib Akhtar-Fawad Chaudhary-Nauman Niaz: Following Shoaib’s resignation, the channel had sent him a recovery notice, asking him to pay Rs 10 crore in damages and reimbursement of three months’ salary of Rs 3,333,000 for violating the terms of his contract.

all’s well That ends well
Salim Safi, senior anchor and political analyst of Geo News, had taken Shoaib Akhtar to Fawad Choudhary’s house, while Dr Niaz himself was called to the residence by the information minister. Information and Broadcasting Minister Fawad Chaudhary shared a picture of himself with cricketers Shoaib Akhtar and Dr Niaz on Twitter, writing, “End is good to all.”

Shoaib Akhtar had tweeted
After the meeting, former Pakistani player Shoaib Akhtar tweeted, “It was an “unpleasant incident” that surfaced on national television, which hurt his sentiments, which is why it took him a while to arrive. He said, “Taking high moral ground, I am accepting Dr Nauman Niaz’s apology. Let’s move on from this.”

It was an unpleasant incident on National Television and it had hurt my sentiments thats why it took me a while. Taking a higher moral ground, i am accepting the apology of @DrNaumanNiaz , Lets move on from this.

what was the whole matter
Akhtar and PTV Sports host Dr Nauman Niaz had an on-air brawl during a live show during a T20 World Cup show on 26 October. After that Niaz had asked Rawalpindi Express to go out. Akhtar, as well as many of his fans and supporters, described the incident as outrageous as it was done in front of other guests including Viv Richards and David Gower.

Credit was given to PCL
Pakistan vs New Zealand match was being discussed on Pakistani channel PTV Sports. In the show, Shoaib Akhtar credited the Pakistan Super League franchise Lahore Qalandars for the inclusion of Shaheen Shah Afridi, and Harris Rauf in the team. Just about this host Nauman Niaz expressed his disapproval, and even asked Akhtar to leave the show.

Akhtar had resigned
Akhtar had tried to settle the matter but when things did not work out, he not only walked out of the show but also announced his resignation from PTV. Information Minister Fawad Chaudhry had constituted a committee under the chairmanship of the Managing Director of PTV to probe the matter. The committee had recently submitted a preliminary report on the matter to the minister.

@shoaib100mph is our pride, no one can insult him on National TV. PM should take notice and will remove Dr. Nauman Niaz from PTV Sports. #iSupportShoaibAkther pic.twitter.com/H4XQl8dA5F