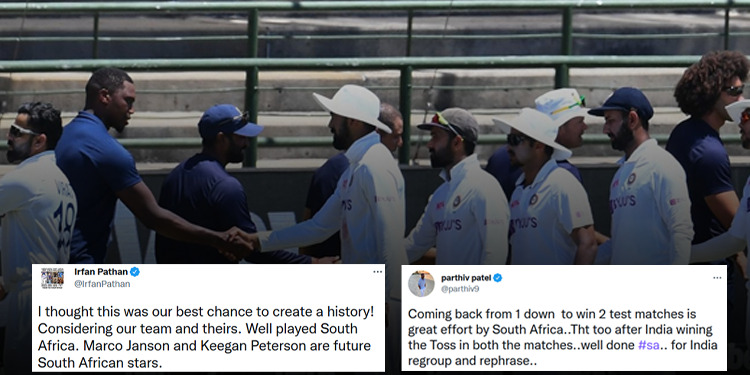 SA beat IND-India tour of South Africa: In the third test match played between India and South Africa in Cape Town, India lost by 7 wickets. With this defeat, India has also lost the Test series against South Africa (IND vs SA Test Series). This time there was a lot of hope from Team India that they would come to win this series but Team India dashed everyone’s hopes. Everyone from the cricket world is giving their reaction on the defeat of Team India. Stay connected for the latest sports news – hindi.insidesport.in

What was the reaction of the cricketers-

Result didn’t go our way but that doesn’t change the fact that this was a gripping series. Every session was a contest. Congratulations to @OfficialCSA, You’ve got a great foundation to build on. Petersen is And Rabada-Nortje-Ngidi-Jansen attack is going to be #SAvIND

Coming back from 1 down to win 2 test matches is great effort by South Africa..That too after India winning the Toss in both the matches..well done #sa.. for India regroup and rephrase..

SA beat IND-India tour of South Africa: Congratulating the South African team, Irfan Pathan said to Team India that I thought this was the best opportunity to win against South Africa.

I thought this was our best chance to create a history! Considering our team and theirs. Well played South Africa. Marco Janson and Keegan Peterson are future South African stars.

IND vs SA LIVE: Mohammad Siraj calls Virat Kohli a ‘superhero’, says- you will always be my captain

These 3 big segments were announced for next week’s Raw