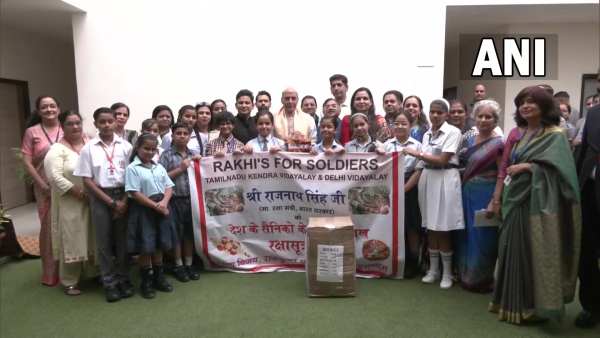 Students from different schools in Delhi have handed over rakhis to Defense Minister Rajnath Singh. These rakhis have been prepared by the children themselves for the soldiers of the Indian Army. Students say that Rakhi has been made for the soldiers guarding the border, because the soldiers are serving our country away from their homes.

Defense Minister himself will deliver the message

Apart from school teachers, BJP leader Tarun Vijay and lyricist Manoj Muntashir were also present at the time of handing over the rakhis by the children to the Defense Minister. Apart from Rakhi, the tricolor was also handed over to Rajnath Singh.

Tricolor with Rakhi, pledge to protect the country

Talking about the Rakhis for the children, Dr Ramasubramaniam, Senior Principal, Bharani Park Group of Institutions, Karur, Tamil Nadu said, “The Rakhis prepared by the children are filled with love and gratitude. He said that 1.5 lakh handmade rakhis have been prepared by the school for the brave soldiers of the country. Thirukkusa is printed on 75,000 rakhis and another 75,000 rakhis are handmade.

On the purpose of handing over rakhis to Defense Minister Rajnath Singh, BJP leader Tarun Vijay said, “These rakhis have been prepared in 18 languages. All rakhis are handmade. Made in Tamil Nadu, about 25,000 of these rakhis are made in the Santhali language. On why Santhali is the language, Vijay said, “We understand that our tribal brothers and sisters have a language and the President also comes from the Santhali community.”

The Defense Minister himself will meet the chiefs of the three armies regarding these rakhis made by the children’s hands. He has told the children that it will be ensured that the rakhis reach the ready soldiers on the borders. Let us tell you whether it is the matter of soldiers stationed on the borders or other professionals related to defense. The police, paramilitary forces and all the security forces set an example of service and dedication away from homes so that citizens can celebrate the festival in full enthusiasm, harmony and a safe environment.

Also read- Sweat for 10 years to buy a dream car, sought blessings from Anand Mahindra after buying a car, got a lovely answer

Share
Facebook
Twitter
Pinterest
WhatsApp
Previous articleCWG 202: Today, Indian punches will rain heavily in the semi-finals, these boxers will be in action
Next articleAir Pollution: Every year 7 million deaths are due to toxic air alone, are you falling prey to it?