HomeNational NewsRajnandgaon: Children are forced to study in 35-year-old dilapidated school, where many...
National News

Rajnandgaon: Children are forced to study in 35-year-old dilapidated school, where many ministers and MLAs came out after studying 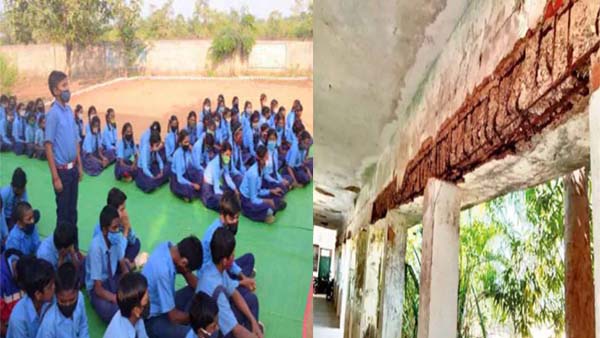 Rajnandgaon, August 06. Dongargarh block government schools in Chhattisgarh’s Rajnandgaon district are full of problems even after the start of the academic session. In the government schools of Lalbahadur Nagar, the largest village of Dongargarh block, children are forced to study education under the shadow of fear. At the same time, the officials of Education Department and PWD are doing the work of repair and construction of these dilapidated schools only in files. The biggest village of this block, Lal Bahadur Nagar, has been announced as a tehsil, but the work of improving the arrangements has not yet started.

Children are forced to study in dilapidated schools
The classes of the government school of Lal Bahadur Nagar, which were recommended for dismantling four and a half years ago by the officials of the Public Works Department (PWD Rajnandgaon) as shabby. More than 650 children are still studying in the same school. Keeping in view the possibility of an accident and the dilapidated condition of the building, children are being taught by sitting in additional rooms of other schools. Chief Minister Bhupesh Baghel had also announced during his visit for the construction of a new building in LB Nagar, which is considered to be the political focal point of the Dongargaon assembly. But till now it has not been approved.

Plaster is falling from the roof of 35 year old building of Lal Bahadur Nagar, cracks on the walls and broken windows and doors. Being the biggest village of the block, maximum number of children are studying in Higher Secondary School LB Nagar. Regional MLA Daleshwar Sahu is also giving only assurance regarding the construction. Due to which other school staff are working under the dilapidated building by closing the rooms. The report of dismantling four and a half years ago was not taken seriously by the responsible.

Lab made classroom, students deprived of practical
The school management has to organize classes in small spare rooms of the school. Waiting for the new building to be built, the management and teachers have removed the lab rooms to make meeting arrangements so that the education of the children is not affected. So that studies are regular. On the other hand, science students are being deprived of practical due to the removal of labs. This building of LB Nagar School, the political center of Dongargaon district, is 35 and a half years old. In view of the deteriorating condition, the PWD officials had given a report for dismantling.
PWD SDO made the report in 2017
The then PWD SDO had clearly written in its report in 2017 that the balconies of the school building have completely rotted. Due to which there have been incidents of plaster and concrete falling at places. The windows and doors are broken. Cracks on the walls, plaster and flooring have been damaged. The strength of the concrete of the roof and thatched is exhausted. Therefore, there is a need to dismantle the old building and build a new one. The building is in the same condition even after four and a half years of reporting.
Many ministers and MLAs came out of school
In the 35-year-old building, many such persons have come out who are still in political positions. But call it irony or inaction that children and parents are sitting till today hoping for the construction of a new building. From here, many public representatives including former MLA Hiraram Verma, former MLA Kheduram Sahu, former district panchayat president Bharat Verma, former district panchayat member Someshwar Verma earned education here.

Order regarding acceptance was not received
PWD Sub Engineer Jitendra Bhanarkar told that no departmental order has come regarding the approval of the new school building of LB Nagar. But the information has been received about the approval in the amount budget.

Rajnandgaon: Children are compelled to study in a 35-year-old dilapidated building, where many ministers and MLAs came out after studying

Bihar Cabinet Expansion Live: Expansion of Nitish cabinet in a while, more than 30 MLAs will become ministers