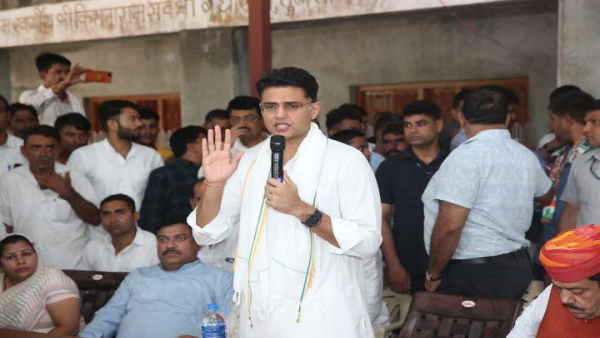 Rajasthan: BJP will gherao the Chief Minister’s residence for law and order, will open a front against the government

The party’s own legislators opened the front

Congress MLAs are opening a front against their own government regarding the law and order situation of Rajasthan. After the death of a Dalit student in Jalore, Minister Rajendra Gudda and MLA Lakhan Singh Meena, who joined the Congress from the BSP, threatened to withdraw support to the government. The same MLA from Atru in Baran district, Panachand Meghwal has sent his resignation regarding the Jalore incident. Former Deputy Chief Minister Sachin Pilot has also demanded justice regarding the Jalore case. However, the Gehlot government has announced compensation to the kin of the deceased and strict action against the culprits. State Congress President Govind Singh Dotasara, including five ministers and half a dozen MLAs have met the relatives of the deceased student in Jalore. But the Congress MLAs are seen with the common man due to the anger arising out of incidents in one caste, class and area. This is the reason why Rajendra Gudha, who became a BSP MLA with the influence of SC ST vote bank, and other MLAs have started announcing withdrawal of support from the government as soon as the issue of Dalits comes up. Other MLAs including MLA Khiladi Lal Bairwa, who do politics of Dalit class in eastern Rajasthan, are also scared of getting angry with Dalit vote bank in other areas including Dholpur, Karauli, Sawai Madhopur, Bharatpur.

conveyed its pain to the Congress leadership

Angry MLAs, fearing the loss of Dalit vote bank, have conveyed their pain to the Congress leadership. He fears that if the vote bank of the Congress may slip on the issue of atrocities on Dalits, then the Congress may suffer a huge loss in eastern Rajasthan. In Jalore, Sirohi, Barmer also, there has been an increase in resentment among Dalit and tribal voters due to these incidents. This is the reason why Congress MLAs cannot participate in dharna demonstrations like the opposition due to being bound in the party constitution. But through their statements, they are raising questions on the law and order situation of the state. The general public has also started attacking the MLAs who are silent in the matter of Dalits through social media. In such a situation, the target of Congress MLAs is now the slowness and negligence of the police and administration. With the help of which they are surrounding the government of their own party.