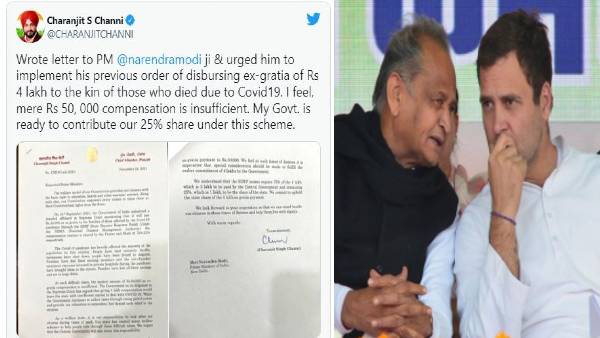 Punjab CM Charanjit Singh Channi has written a letter to PM Modi recommending him to give Rs 4 lakh each to the next of kin of those who died of Kovid-19. CM Channi has said that compensation of Rs 50,000 is not enough for the family members of the person who died of Kovid-19. Along with this, CM Channi said that the Punjab government has also agreed to contribute 25% of the compensation amount. He argued in the letter that due to the Kovid epidemic, most of the population of the country has been badly affected. People’s businesses closed and they were forced to migrate. While many families witnessed the untimely death of their earning members, many families were left on the streets due to expensive treatment in private hospitals. In such difficult times, compensation of Rs 50,000 to the next of kin of the deceased is not enough.

CM Channi wrote in the letter that being a welfare state, it is our responsibility to help the citizens in distress. He said that the Central Government should give 75 percent of the compensation amount i.e. three lakh rupees under the State Disaster Relief Fund. The state government is ready to pay 25 percent of the amount i.e. Rs 1 lakh. CM Channi demanded that the Central Government, Ministry of Home Affairs should implement its earlier order issued on March 14, 2020. In which the central government had committed an ex-gratia amount of four lakh rupees to the relatives of the deceased on the death of a person due to corona. He said that by amending this notification, the Central Government has reduced the ex-gratia amount to Rs 50,000.

Congress will put pressure on the central government

It is worth mentioning that earlier Congress President Rahul Gandhi had also raised the question and said that the Central Government should give the correct figures of people who lost their lives due to Corona. Along with this, he said that the central government should give a compensation of four lakh rupees to every victim’s family. Rahul Gandhi also said that his party will pressurize the government to provide compensation of Rs 4 lakh to the affected families. At the same time, Rajasthan CM Ashok Gehlot has also written a similar letter to Prime Minister Modi demanding that the families of those who lost their lives due to corona virus infection should be given an ex-gratia of Rs 4 lakh instead of Rs 50,000. At the same time, Ashok Gehlot said that the truth should come out about how many deaths have occurred due to corona virus in the country. With the decision to repeal the Agriculture Act, the Bharatiya Janata Party has done damage control, but the way the Congress has opened a front against the BJP at the national level, it may increase the problems of the BJP.

Fortification of Krishna Janmabhoomi complex in Mathura, announcement of placing an idol of Krishna in Idgah mosque