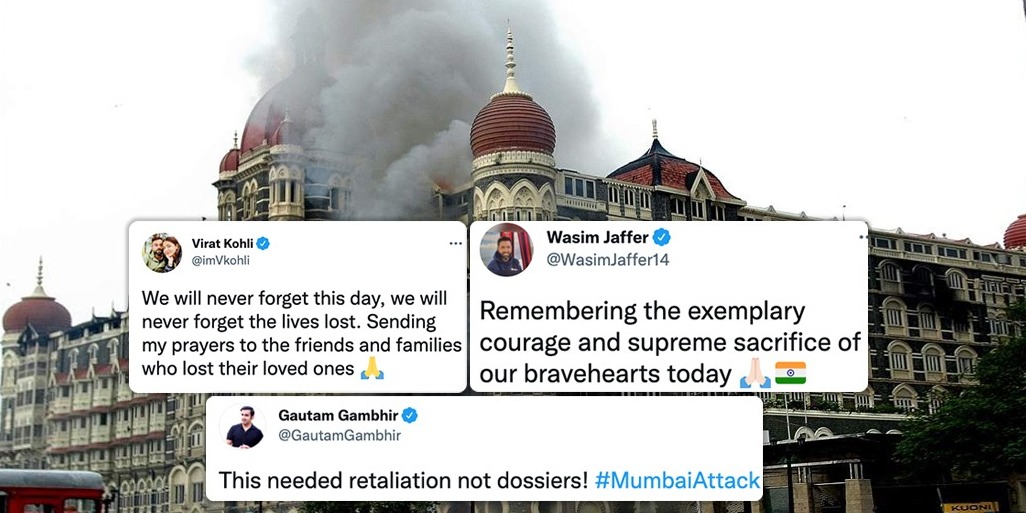 Mumbai Attack 26/11: 13 years ago today (2008 Mumbai attack), 10 terrorists who came from Pakistan in the financial capital of India wreaked havoc of terror. The people of India are still unable to emerge from that shock. 166 people lost their lives in that terrorist attack. Indian cricketers paid tribute to those who lost their lives during the Mumbai attack. Those who paid tribute include Virat Kohli, Gautam Gambhir, Virender Sehwag and many other players. Stay connected for the latest sports news hindi.insidesport.in

Mumbai Attack 26/11: Former India cricketer Wasim Jaffer paid tribute to the soldiers who lost their lives in the Mumbai attack. He tweeted, “Today remembering the exemplary courage and supreme sacrifice of our heroes. Along with this, he shared the emoji of a Namaskar with the flag of India.

Mumbai Attack 26/11: Former India opener Virender Sehwag remembered the martyr Tukaram Omble, who lost his life fighting against terrorists in the Mumbai attack while serving as an assistant sub-inspector in the Mumbai Police.

13 years since the sad day. He is of the greatest son of our soil- Shaheed Tukaram Omble. The courage, the presence of mind and the selflessness demonstrated by him on that day- no words,no awards can do justice. Dandavat pranam hai aise mahaan insaan ko. #MumbaiTerrorAttack pic.twitter.com/wi4t8wHV56

Mumbai Attack 26/11: Former India opening batsman Gautam Gambhir paid tribute to those who died in the Mumbai attack by sharing a photo of Hotel Taj.

2008 Mumbai attack: In the Mumbai attack, 10 Pakistani terrorists entered Mumbai through water and they carried out attacks at different places in Mumbai. In many places they attacked simultaneously. 165 people died in this attack. Of the 10 terrorists, 9 were killed by the police during the attack. Mohammad Ajmal Kasab, he was caught alive. Who was hanged on November 21, 2012.