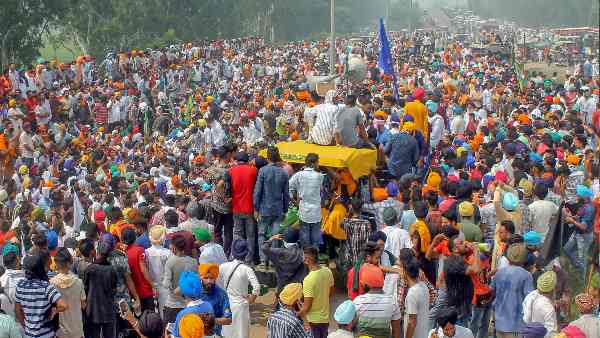 New Delhi, 26 November. Today, the farmers’ movement against the three agricultural laws across the country has completed one year. Although the Modi government has taken all the three new three back agriculture laws and appealed to the farmers to end their agitation and return to their respective homes, the farmers still continued their agitation and after the completion of one year of this movement. On the occasion, it has been announced to unite on the borders of Delhi and for this reason the security has been increased on the Delhi border.

Let us tell you that at this time a large number of farmers from Haryana, Punjab have reached the border of Delhi. In view of the increasing crowd of farmers, the deployment of security forces has been increased on the border and barricades have been put up. In this regard, Special Commissioner of Police (Law and Order Division Zone-1) Deependra Pathak said, “Adequate security deployment has been made on the border to avoid any untoward incident.”

It is known that the farmers are demanding that their agitation will continue until the government gives a clear stand on the Minimum Support Price (MSP) for the crops and the United Kisan Morcha (SKM) will take a call on November 27 to decide on the further steps. Will have another meeting. Not only this, farmers have also written a letter to Prime Minister Narendra Modi regarding this.

We could not face the constant propaganda of the opposition

Uma Bharti expressed regret over the withdrawal of the Agriculture Act. She had tweeted about this, ‘I was speechless when our Prime Minister Hon’ble Shri @narendramodi ji announced the withdrawal of all three agricultural laws on 19th November 2021, so I am responding after 3 days. We could not face the constant propaganda of the opposition regarding agricultural laws. That’s why I was getting very upset by Prime Minister @narendramodi ji’s address that day.

November 26, a year of farmers’ protest: Program across the country, security tightened at Delhi’s borders