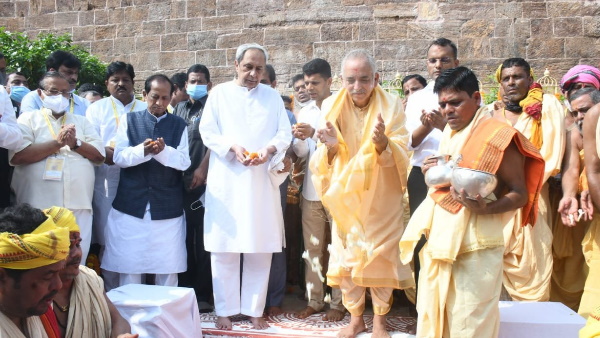 Puri, 25 November: Odisha Chief Minister Naveen Patnaik on Wednesday laid the foundation stone of Shri Mandir Parikrama. He concluded the event with a symbolic laying of a stone at the construction site. He had reached Puri around 9 in the morning to attend this function. After this he boarded the car from Singhdwar and reached the place of Yagya near Shrimandir. The Gajapati Raja Dibyasingh Dev of Puri performed this three-day yagya with full devotion and after that the Chief Minister laid the foundation stone of the parikrama.

The parikrama will have a mega reception hall for 6,000 pilgrims, a large cloak room, toilets for women and men at all the four gates, first aid centers and police support posts besides drinking water. Four watch towers will be built around Shri Mandir Parikrama for security. It is noteworthy that the devotees were allowed to use the Singh Dwar to enter the Shrimandir.

Shri Patnaik stayed at the Yagyasthal for about 90 minutes. On this occasion, the Chief Minister also honored 131 persons and 15 Mahants who gave their land for the construction of Heritage Parikrama Corridor within a radius of 75 meters around the Meghnad ramparts of Shrimandir. He also unveiled a model of the Parikrama project and left after worshiping Patitapan at the Singhdwara. The contract for the project, to be completed at a cost of Rs.331.28 crore, has been awarded to the Tata group, which will be completed within 18 months. Will be done.

Who is IPS Praveen Sinha? Who will represent Asia in the top panel of Interpol

During the Chief Minister’s visit, very tight security arrangements were made here, even the media personnel were kept away from the Yagya. During this, arrangements were also made for live broadcast for the general public by the IPR department. During this time, there was heavy deployment of police force on the way around the temple. Chief Secretary SC Mohapatra, Chief Administrator of Shri Jagannath Temple Dr. Krishna Kumar, 5T Secretary VK Pandian, Collector Samarth Verma and Superintendent of Police K. Vishal Singh were also present on the occasion.