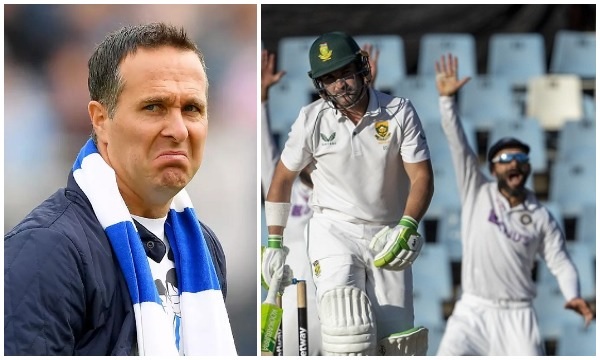 Even on the fourth day of the Cape Town Test match, that episode between Ravichandran Ashwin and Dean Elgar was shown several times. Former England captain Michael Vaughan has also given his opinion on the matter that happened in the 21st over during India’s bowling. Michael Vaughan is not happy with Virat Kohli’s behavior. He had a conversation with Fox Cricket in which he believes that the ICC should take some step in such a matter and such things should not be allowed to happen in international cricket.

Actually, when Dean Elgar was given not out by DRS, Virat Kohli was repeatedly pulling himself on the mic and he also called the broadcaster bad. Even Ravichandran Ashwin was heard speaking.

Speaking to Fox Cricket, Michael Vaughan said, “It is very important for the ICC to take some action on this matter because you may be in annoyance, but you can’t do these kind of things. Of course during the game we have Such incidents keep happening together but you are the captain of this game, then ICC should take steps and not allow such things to happen.”

Vaughan also says that Virat Kohli is the captain of an international team and he should have behaved with a little more maturity. Even Michael Vaughan demanded a fine and ban on Virat Kohli.

This match is very difficult for Kohli-

By the way, this match has become very difficult for Virat Kohli because he showed a lot of passion to stay in both the innings as a batsman but could not cross his team’s boat in any innings. Even the Indian fast bowlers tried their best to cover up the poor form of the batsmen and in reply to the 223 runs scored by India in the first innings, South Africa were bundled out for 210 runs but where were the Indian batsmen going to believe, He scored 198 runs in his second innings despite Rishabh Pant’s finest century, due to which South Africa is now moving towards winning matches and series at a fast pace. By the lunch break on the fourth day, South Africa had made 171 for the loss of 3 wickets.