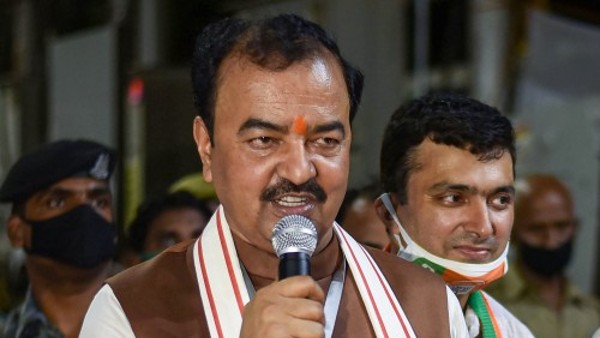 New Delhi, January 14: The process has started for the first phase of assembly elections in the country’s largest state Uttar Pradesh. Because of which political parties have put full emphasis. Although BJP has not opened its cards yet, but Samajwadi Party along with Rashtriya Lok Dal released its first list. In which the names of 29 candidates are from Western UP. There are some names in this list, on which questions are being raised. On this, the reaction of UP Deputy CM and senior BJP leader Keshav Prasad Maurya has come to the fore.

Keshav Prasad said that seeing the list of Samajwadi Party that has been released recently, not only me, but the entire state has become alert. SP has done the work of showing the trailer of western Uttar Pradesh which was the situation before 2017, now through the first list. He cannot leave the side of criminals, rioters, this is a clear message of Akhilesh Yadav. Formation of Samajwadi Party government means to bring again rioters and goondaraj in the state.

The Deputy CM further said that I saw the complete list, there are names of many criminals in it. Some cases are also registered against them. I want to ask what message Akhilesh wants to give by giving tickets to these criminals. Will you return to Muzaffarnagar riots again? Will there be a situation of migration again in Kairana? According to Maurya, Akhilesh has tried to send a message through his list that he is bringing back the goons. By campaigning against this character of SP, BJP will send the message to the public.

Akhilesh also targeted
At the same time, the process of BJP leaders joining the SP is going on. On Friday, Akhilesh Yadav said that wickets are falling continuously there. Although CM Yogi himself does not know how to play cricket. Even if he knew how to play, his catch would have been missed. He said that now the BJP will not get three-fourth, but three-four seats, while the SP alliance can win 400 seats.