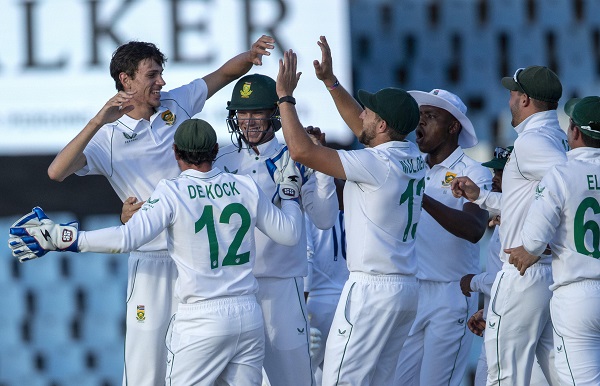 Interestingly, both Bumrah and Marco Yensson were part of the Mumbai Indians squad in IPL 2021. Bumrah has been retained by five-time IPL champions Mumbai Indians while the young Proteas pacer will enter the auction.

Morko Yensson took 19 wickets in his first series and troubled the Indian batsmen with his disciplined bowling. In this series, only Kagiso Rabada took more wickets than him, who had 20 wickets, but in the name of average, Yensen was the second best, who bowled at an average of 16.47. The best average went to Lungi Ngidi, who took wickets in the series at an average of 15.

Rishabh Pant went to fly Oliver out of the field, instead of the ball, the bat flew out of his hand- VIDEO

There was a clash with Bumrah-

In fact, during the second test match in Johannesburg, there was a heated argument between Yensen and Bumrah. During the second innings in Johannesburg, Yensen fired a slew of bouncers when it came to his turn in response to Bumrah’s short deliveries, before a heated argument broke out between the two. Bumrah reacted by gazing after the South African pacer was dismissed in the first innings of the third Test. Prince was impressed by Marco Jansson’s reaction to the clash between these two bowlers.

Prince wrote on his official Twitter profile, “Another thing that I especially liked during the #SAvIND series is that #MarcoJansen didn’t hold back even once in a fight with Bumrah! He didn’t even think about IPL. How this clash could affect his relations with the people there. He put his country ahead and it should be so.”

Prince further says, Well done child, never change yourself. Be yourself and put your country first by being a competitor if people don’t like you the way you are. This is the problem of the people. The game is about being competitive where there is not an inch to leave the field, just the spirit of the game. It is not just for filling money in the bank.

South Africa chased down 212 runs in the final Test played in Cape Town on Friday to register an impressive series win over India. Both the teams will now be involved in a three-match ODI series starting from January 19.