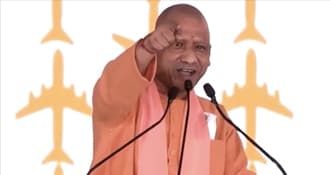 Jinnah controversy was once again seen during the foundation stone laying ceremony of Jewar Airport in Gautam Budh Nagar. Even though the occasion was to lay the foundation stone of Jewar airport, but UP Chief Minister Yogi Adityanath did not miss to criticize the founder of Pakistan Muhammad Ali Jinnah. In the UP assembly elections, all the political parties are trying to win.

Refuting the remarks of his rival Samajwadi Party chief Akhilesh Yadav, Adityanath said the country will have to choose between “sweetness of sugarcane” or “followers of Jinnah” in the state.

Addressing a crowd of thousands in the presence of Prime Minister Narendra Modi, Adityanath said, “Some people had tried to create bitterness by instigating riots in the sugarcane area (western parts) of Uttar Pradesh. Now the country has to decide whether sugarcane is available.” The sweetness will increase or Jinnah’s followers will do mischief.”

Opportunity to lay the foundation stone of “NOIDA INTERNATIONAL AIRPORT”

And Jinnah in tongue

This panic of Adityanath is not good for UP pic.twitter.com/Y8ytesGeQI

Addressing a rally, the Samajwadi Party chief said, “Sardar Patel, Mahatma Gandhi, Jawaharlal Nehru and Jinnah studied in the same institution and became barristers. They became barristers and they fought for India’s independence. Don’t back down.”

The BJP had reacted strongly to Akhilesh’s remarks. Yogi Adityanath called it “shameful” and a sign of “Talibani mentality”.