IND vs BAN, Weather Update: Will rain again start another series for India? The first match of the 3 ODI series between India and Bangladesh will be played in Mirpur on Sunday. Rohit Sharma, Virat Kohli will also return to the team from this match. 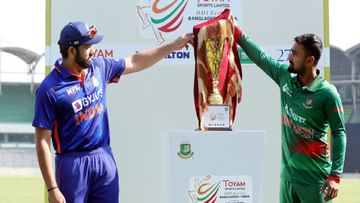 In the past, the rain had ruined the fun of India’s tour of New Zealand. First T20 series and then total 4 matches of ODI series were affected by rain. India won the T20 series 1-0 and lost the ODI series 0-1. Now the challenge of Bangladesh is in front of India. The first ODI between India and Bangladesh will be played in Mirpur on Sunday. Indian fans are keeping an eye on how the weather will be in this match. Like the previous series, this series will also start with rain.

Everyone is eager to know this, because due to rain, the fans could not watch the entire T20 and ODI series between India and New Zealand properly. In such a situation, he is feeling scared about the weather of Mirpur as well, but there is good news for the fans here. The weather of Mirpur will be clear on the day of the match. It will be sunny and there is not even a percent chance of rain. That is, the fans will get to see the entire match. The temperature will be around 28 degree Celsius.

The two Captains unveil the ODI series trophy on the eve of the 1st ODI at SBNCS, Mirpur.#BANvIND #TeamIndia pic.twitter.com/h08tPXn69b


Shock to India before the series

Share
Facebook
Twitter
Pinterest
WhatsApp
Previous article
Badruddin Ajmal apologized for the statement on Hindu girls, said- will have to think on population control
Next article
In Ghaziabad, wife along with her lover killed her husband, children told the story of the incident

Snowfall forecast in the mountains for the next two days, winter will increase with fog in North India