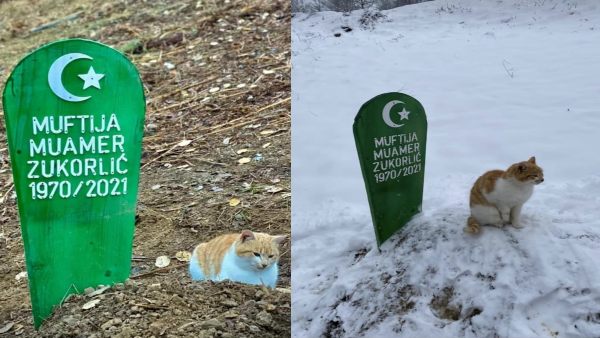 cat’s love for its owner

Till now you must have heard the tales of loyalty in the name of dog, but now we are going to tell you about a cat who did not leave his owner till the end. Two months after the death of its owner, the pet cat is seen sitting near his grave. The cat is not ready to leave the grave of its owner even in the severe cold.

In fact, a Twitter user named Laveder posted a tweet in November last year and shared two photos, in which a cat was seen sitting sadly near its owner’s grave. The photo was posted with the user writing that after the death of Mufti Sheikh Muamer Zukorli last week (6 November 2021), his cat has not left the grave since his funeral, and is always seen near the grave of the Mufti .

The former Mufti of Serbia, Sheikh Muamer Zukorli, died of a heart attack on November 6 last year. According to media reports, he was a well-known figure from the Muslim community of Serbia. At the same time, the cat he had raised loved him so much that even after he left the world, she wanted to stay with him.

Cat found there even after 2 months

Twitter user Laveder said that she is seen walking around near Sheikh Muamer’s grave or sitting sadly next to him. Even after two months of his departure, where the snow has started falling now. It’s awfully cold, but the cat isn’t ready to leave the place. Recently, once again Lavedar has tweeted a photo, in which the cat has been found sitting there.

Snow all around but the cat did not leave the grave

Posting a new photo on January 11, Laveder wrote that Muamer’s cat is still here. With this, you can see in the picture that the same brown and white cat is seen sitting near the grave. A sheet of snow is frozen all around, but the cat is sitting on its master’s grave as before. This photo has now gone viral on social media. Users are getting emotional after reading about this lovely relationship. Also, thousands of users have liked this photo. At the same time, people are also getting emotional in the comments.

Uttar Pradesh elections: Situation of confrontation in the SP-RLD alliance in western UP

Many children hospitalized due to viral ‘One Chip Challenge’ on social media, know what it is