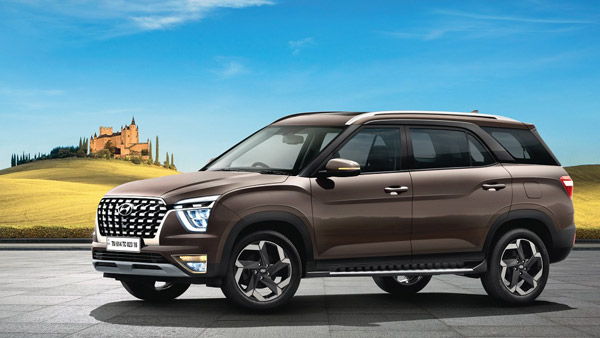 Hyundai Alcazar is to be brought in 6 and 7 seater options. You can fold the seat (in 60:40 ratio) and enter with one touch to move to the third row. While the third row can easily accommodate two people, it is longer than the Creta, with a wheelbase of 2,760 mm, though there could be a slight reduction in legroom.

The 6-seater variant gets two captain seats in the middle row. A central console has been given in between the captain seats, in which arm rest, mobile phone charger and cup holder have been given. Whereas in the 7-seater variant, you get a second row folding seat with a central armrest, which can help in easy entry and exit for the third row occupants.

This SUV will be made available in two engine options – 2.0-litre naturally aspirated petrol and 1.5-litre diesel. Where its petrol engine provides maximum power of 159 bhp and 191 newton meter of torque. There will be a choice of 6 speed manual and 6 speed automatic gearbox.

At the same time, its diesel engine provides power of 115 bhp and torque of 250 Newton meter. There will also be a choice of 6-speed manual and 6-speed automatic gearbox. Apart from this, the option of three drive modes – Comfort, Eco and Sport will be given, as well as traction control mode – Snow, Sand and Mud.

The Alcazar is a bigger vehicle than the Creta, so it will cost a bit more. The Alcazar can be had for a price of Rs 12 – 20 lakhs, ex-showroom. Alcazar is going to compete with the upcoming Jeep 7-seater SUV in the Indian market including models like MG Hector Plus, Tata Safari.

Okinawa iPraise+ electric scooter becomes cheaper by up to Rs 17,900, gives range of 180 km on a single charge

The country will need 4 lakh charging stations by 2026, the report revealed

Billions worth of penthouses were bought by paying with crypto, know the price of this...

Workout Tips: Learn what to do and what not to take full advantage of Workout

Why Rakesh Roshan’s name is trending on Twitter, is fun

Healthy Lungs Home Remedies: will be strong if there is no problem in taking oxygen,...

Sushant Singh Rajput had made an SOS call to his sister Mitu Singh before the...