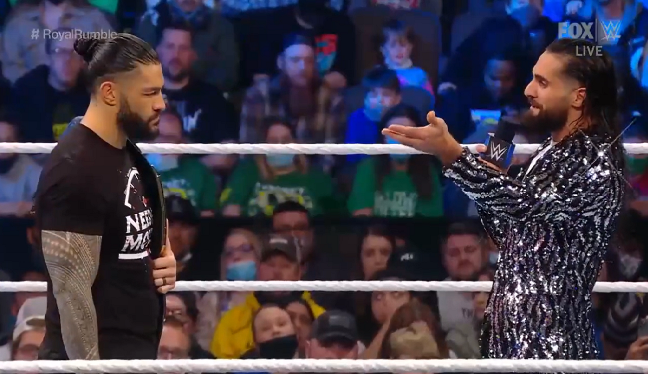 One of the best things about tonight’s show was the return of the WWE Hall of Fame to SmackDown. It was only last week that Lita was announced to participate in the Women’s Royal Rumble match and today she appears at the Blue Brand after 20 years. Where she was interviewed by Michael Cole in the ring. In this interview, Lita revealed that her comeback is not just one time but she has returned for another run in WWE.

Along with this, Lita also told that she wants to win WrestleMania 38 by winning the Royal Rumble match. But her promo was interrupted by Charlotte Flair. After which a few words were exchanged between the two women superstars and then Lita ended the segment after applying a twist of faith to Charlotte.

Roman Reigns and Seth Rollins face off against each other in the main event of SmackDown tonight. Where Rollins first asked the audience of Omaha to accept him. After this Seth asked him to pose for the shield. Roman refused to give it. After this both the superstars attacked each other with words. Rollins said that he has always dominated Roman and his match. Hearing this, Roman got angry and called Rollins the Joker.

The Universal Champion then went a step further and said that he never wanted to face Rollins on Raw, instead if he had the option of facing a bigger Raw star, it would have been his wife, Becky. facing Lynch. After this, Roman’s cousins ​​The Usos tried to attack Rollins. But Rollins saved himself from it.

read this also- WWE Smackdown Results: From the return of Lita to the announcement of 4 new names for Men’s Royal Rumble Match, here are the top 3 moments of today’s show, what did you see?

WWE Smackdown Highlights: Bad things from today’s SmackDown
Aaliya insults Natalya
A new Superstar humiliating an experienced Superstar is nothing new in WWE and the same thing happened tonight. Where Natalya is humiliated by Alia. Alia is a fan favorite and tonight she registered the fastest win in WWE history at 3.17.

But this victory of Alia will definitely damage Natalya’s Guinness Book of World Records. Which WWE probably shouldn’t have done. Therefore, it cannot be called a great booking from Vince McMahon & Co.

After the backstage segment ended, Naomi once again appeared in Sonya’s office. But this time Adam Pearce was also present there. In this backstage segment, Naomi tries to attack Sonya. Whom Pearce stops and books her match against Charlotte Flair for next week.

Legends League Cricket 2022: Virender Sehwag will not play in the initial matches,