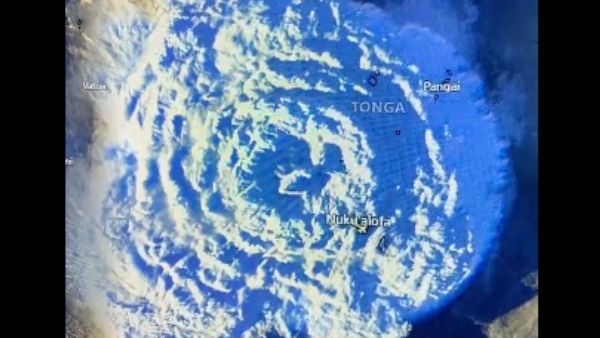 According to the report, an underwater volcano has erupted near Tonga Tweep, after which a plume of smoke has been seen rising in the sky for about 20 kilometers and since then a tsunami warning was issued and people were sent to the beach. Was advised to stay away from At the same time, the waves of Sumani are also coming inside the island, after which people have been asked to stay inside their homes. According to local media, the volcano erupted about 30 kilometers southeast of Fonuafou Island in Tonga. At the same time, Tanila Kula, head of Tonga Geological Services, said that the radius of the blast was spread over about 260 km.

At the same time, local people have told the Spectator Index that, after the volcanic eruption, there is still ash spread in the sky and small pieces of stones are falling from the sky. According to the local people, it seems that ash is raining from the sky. At the same time, all the flights have been canceled after the situation worsened. According to the report, the volcano has been erupting intermittently since December last year in the sea near this island and this time there has been a strong eruption in the volcano. At the same time, the sea has taken a formidable form and water has entered the cities.

At the same time, all government offices have been discharged by the Republic of Tonga and people have been instructed to stay in their homes. While officials have ruled out conducting any rescue operations or evacuating people so far, people have been advised to stay away from beaches and low-lying beaches in Tonga, while The Hunga Volcano is being continuously monitored. At the same time, according to the news of the news agency Reuters, the tsunami is about 2 feet high. The volcano Hunga-Tonga-Hunga-Hapai was heard after the volcano erupted again on Friday, with ash, steam and gas rising 20 kilometers into the air, Radio New Zealand reported.

Where is the Tonga Republic

Let us tell you that Tonga is a Polynesian kingdom of more than 170 South Pacific islands, where there are also dozens of uninhabited islands, where no one lives. At the same time, most of the islands are surrounded by white beaches and surrounded by tropical rainforest. The names of the main islands here are Tongtapu, Lagoon, where there are limestone rocks. Officially it is called the Kingdom of Tonga and Tonga is a constitutional monarchy, as in Britain, and speaking anything against the monarch is considered against constitutional etiquette.