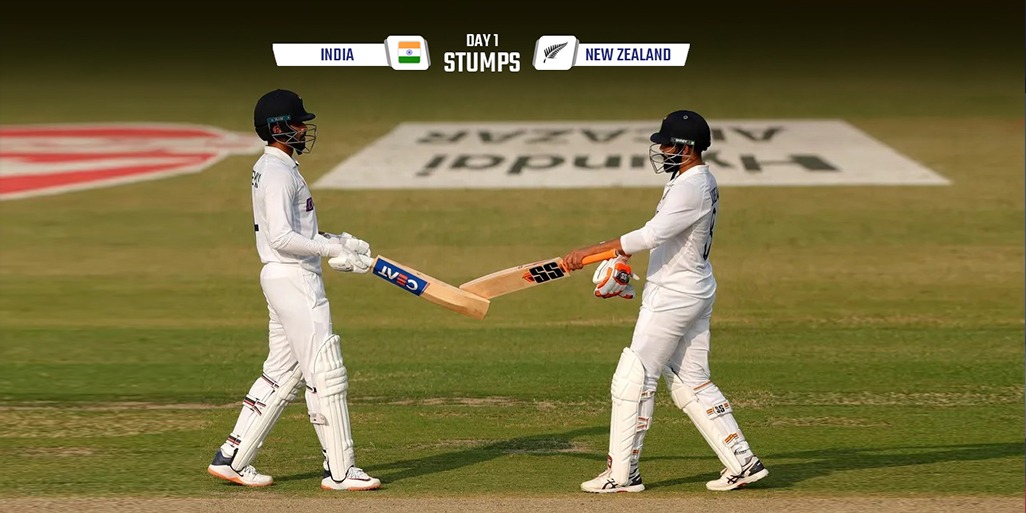 Ind vs NZ 1st Test (IND vs NZ 1st Test DAY 1 Highlights:) – India vs New Zealand Test series: The first match of the two-Test series between India and New Zealand is being played in Kanpur from Thursday (November 25). India captain Ajinkya Rahane won the toss and elected to bat first. By the end of the first day’s play, India scored 258 runs in 84 overs for 4 wickets. Shreyas Iyer, Ravindra Jadeja and Shubman Gill played half-centuries for Team India. Due to the innings of these three, India overshadowed New Zealand on the first day. Keep reading for the latest sports news English.InsideSport.IN

India vs New Zealand Test series: Iyer, who won the ‘Test cap’ in the absence of some top players, is still at the crease after scoring 75 runs, which is sure to add to the selectors’ headache while selecting the playing XI for the Mumbai Test as regular skipper Virat Kohli will then return. Iyer has faced 136 balls so far and has hit seven fours and two sixes. He has so far added 113 runs for the fifth wicket with Jadeja (50 not out off 100 balls). The day’s play was declared over six overs ago due to bad light.

Ind vs NZ 1st Test (IND vs NZ 1st Test DAY 1 Highlights:): Apart from these two, the innings of opener Shubman Gill (52 off 93 balls) was the center of attraction. Cheteshwar Pujara (26 off 88 balls) and skipper Ajinkya Rahane (35 off 63 balls) failed to play big innings despite good starts while opener Mayank Agarwal (13 off 28 balls) failed to make the most of the opportunity. The tall pacer Jamieson (3 for 47) again troubled the Indian batsmen. He bowled Gill and Rahane after Agarwal was caught by wicketkeeper Tom Blundell in the morning session. Veteran pacer Tim Southee (1 for 43) meanwhile disturbed Pujara’s concentration.

India vs New Zealand Test series: The pitch was slow and the ball was staying down on it but it was not getting the required turn, due to which the three New Zealand spinners Ayaz Patel (78 runs in 21 overs), William Somerville (60 runs in 24 overs) and Rachin Ravindra (seven overs) 28 in) had to struggle. Both Gill and Iyer batted freely in front of the spinners.

IND vs NZ 1st Test Day 1 Highlights: Waiting for Pujara’s century extended
This was a great opportunity for Pujara to end his long wait for a century. He had just tried to open his hand by hitting fours on Jamieson and Patel when the Southee’s ball on the fifth stump line ended up in Blundell’s gloves kissing his bat. Pujara scored his last Test century in January 2019. He hasn’t reached triple digits in the last 23 Tests and 39 innings and averages 28.78 in the meantime.

The same was the case with Rahane, for whose career two Test matches against New Zealand could prove to be important. There was a time when he seemed to like the Green Park pitch and he would play big innings to secure his place in the team going to South Africa but Jamieson soon broke the illusion.

Umesh Yadav has been included in the India team. This is his 50th test match.

A special half-century for the Vidarbha Express

PS How many wickets will he pick in his milestone Test?#INDvNZ #TeamIndia pic.twitter.com/kIVmXJtsIC

Ind vs NZ 1st Test (IND vs NZ 1st Test DAY 1 Highlights:) – India vs New Zealand Test series: Rahane said during the toss that he is going with three spinners and two fast bowlers. Shreyas Iyer is making his Test debut with this match. Iyer has been given the Test cap by India’s great batsman Sunil Gavaskar.