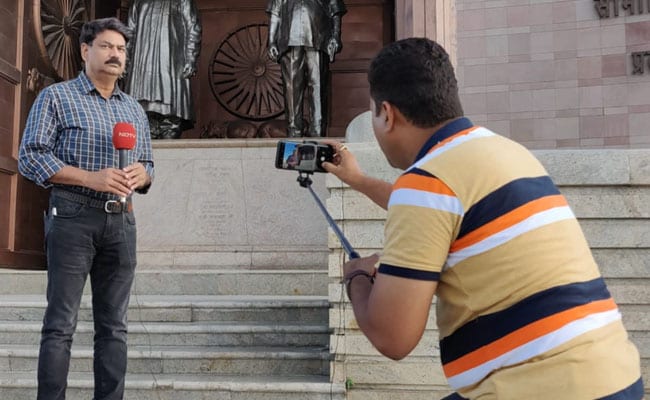 Shiva:
As the sun comes out,
The sky turns blue.
As if you are awake from meditation, Mahadev.
Slowly the ash tree rises up, a blue man.
And the blue body glows in the sun and starts burning abundantly.
In the evening, Mahadev again gets absorbed in meditation.
The blue gets darker…and gets darker.
It’s night.
Poet: Farid Khan

Kamal sir became blue in meditation, he knew that I have great faith in God, so many times he used to say many things unique and different.

In 2014, while doing a series on the plight of farmers in Marathwada, I spoke a sher of Adam Gondvi, my teacher at Jamia, Shahid sir called as soon as the program was over and scolded saying that it was such a good report, why have you started doing poetry like Kamal Khan? (Shahid sir is also close to Kamal sir) … I said sir, didn’t remember me, just felt that nothing can be better than this here and Kamal sir’s shadow is also very big. Shahid sir explained that your stories are with figures, it has a different flavor, Kamal is on a different level regarding language, mixing both can sometimes go awry. I understood sir.

Today Ravish sir has written, “Have seen and heard Kamal Khan. Which is also important to know so that it is important to know that Kamal Khan does not become one by listening to the shers of Ahmed Faraz and Habib Jalib. Even for writing a two-minute report, he Used to think all day long.”

The patience that Kamal sir had in his stories was also in his personality. Even in the matter, there was no rush, whatever was asked comfortably, he never refused the help he asked for. It took a long time to listen to him live with him many times, but not cumbersome, every word was threaded in his understanding, dedication, study.

We used to talk sometimes its scope was the office, sometimes Delhi is far away for the colleagues of the bureau. He was disciplined as he looked, advocates of Ganga-Jamni tehzeeb, sensitive to every section of the society, his last picture of yesterday in which he was talking about gender equality. Going to Lucknow during monsoon express in 2010 Happened, but could not meet Kamal sir who had just touched him. Lucknow must have given him the rites of not being rude in the language, that’s why Priyadarshan sir remembers him and writes, “While talking on the rude language of the leaders in the politics of UP, he prepared a long news. The leaders of almost every party have this rudeness. I was seen beating each other. At the end of the news, Kamal Khan did not criticize all this. He said, from Lucknow, the city of Tehzeeb, Shameer Main Kamal Khan.” Post graduate in English but amazing in Hindi, Urdu Knowledge of pen Russian.

Deepak Tiwari, a senior journalist from Madhya Pradesh, wrote in a message, “I remember well when Mayawati’s government was coming to power in 2007, Kamal Khan said a lion in front of the camera: “The man who was Takht Nasheen before this, He too was so sure of his own God.

Sometimes I can’t separate the emotion from the news, anger is visible in the tone of the body, but Kamal sir was amazing in all of this… It was wonderful to get along with him beyond linguistic purity. Manish sir’s message came this morning, I kept saying the same thing for 2-3 times, who was not sure, kept repeating the phone call, he was very fit and disciplined, how was this … then the news started running, many people from all over the country continuously Started asking… I was giving patience to myself too… We never have pressure to break the news of death here, Kamal sir what was the pressure to give this news.

Sir you had quoted Iqbal in your report, I am for you…
India is proud of Ram’s existence, considers him to be Imam-e-Hind.