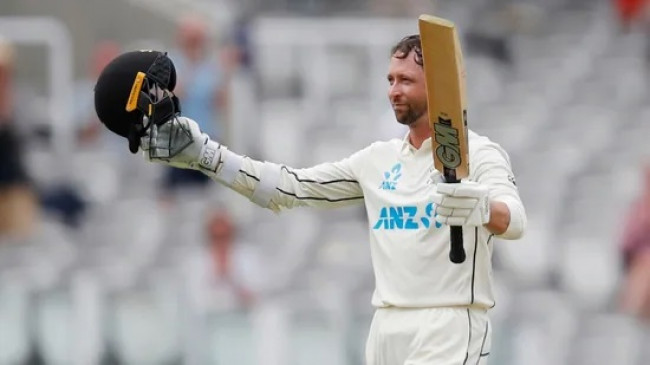 Digital Desk, New Delhi. New Zealand opener Devon Conway scored a blistering 200 runs in his debut Test match. With this, Conway broke the record for the most runs scored by a left-handed batsman in a debut match. Conway has broken Indian opener Shikhar Dhawan’s 8-year-old record. Dhawan had played an innings of 187 runs while making his debut in 2013. He scored these runs in the match played against Australia in Mohali. In his innings, Dhawan scored 187 runs in 174 balls with the help of 33 fours and 2 sixes.

Conway was dismissed for 200 runs in 347 balls with the help of 22 fours and 1 six. With this, he has also become the sixth batsman in the world to score a double century in Conway’s debut innings. Conway also holds the record for playing the biggest innings on English soil in the debut test. Conway achieved this feat when he scored his 155th run against England. Earlier this record was in the name of Ranjit Singhji of England, who scored an unbeaten 154 in his debut Test (Manchester) against Australia in 1896.

On the basis of this innings of Conway, New Zealand scored 378 runs in the first innings on the second day of the first Test match being played against England at Lord’s ground. New Zealand started their innings at 246 for three this morning with Conway leading by 136 and Henry Nicholls by 46 runs. Both the batsmen played good innings to lead New Zealand towards a strong score and Nicholls scored a half-century.

Both the batsmen put together a partnership of 174 runs for the fourth wicket. Wood broke this partnership by dismissing Nicholls. Nicholas scored 61 runs in 175 balls with the help of four fours. After this, Wood and Robinson made England return to the match and New Zealand’s innings faltered. After the dismissal of Nicholas, New Zealand lost the wickets of BJ Watling (1), Colin de Grand Hom (0) and Mitchell Santner (0) within just six runs. By the lunch break, New Zealand’s team had scored 314 runs for seven wickets.

In the second session after lunch, Robinson dismissed Kyle Jamieson (9) and shortly thereafter Anderson struck out Tim Southee (8) to give New Zealand the ninth blow. Conway continued his innings from the other end and scored a double century in his debut Test itself. However, he was run out as the last batsman while Neil Wegner remained unbeaten on 25 off 21 balls with the help of three fours and a six. For England, Ollie Robinson took four wickets, Mark Wood took three wickets and James Anderson took two wickets.

From Ananya Panday to Katrina Kaif, this actress is giving romantic poses in pink dress

11 year old girl who came to get chocolate was raped by the shopkeeper, the...

Now e-books will be taught in government schools of Haryana