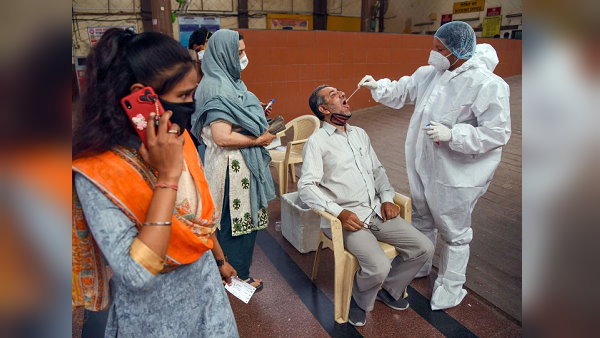 New Delhi, The cases of coronavirus infection in India are increasing day by day. According to the latest data shared by the Union Health Ministry, 10,549 cases of corona have been registered in the country during 24 hours, which is 15.7 percent more than yesterday. With this, the total cases of infection have reached 3,45,55,431 so far. Out of which 3,39,77,830 have been recovered. A total of 9,868 recoveries were made in the last 24 hours. At the same time, now the active cases are 1,10,133. It is being told that there has been an increase of 193 in active cases in the last 24 hours.

It is a matter of relief that the recovery rate of Kovid-patients in India is now 98.33 percent. According to the Health Ministry, among all the states, Kerala recorded the highest number of cases at 5,987, followed by Maharashtra with 848 cases, West Bengal with 758 cases, Tamil Nadu with 739 cases and Mizoram with 444 cases. These five states accounted for 83.2 per cent of the daily new cases reported on Friday, with Kerala alone accounting for 56.75 per cent of the fresh infections.

13-year-old Dipesh’s street is seen on the road of Faridabad, the taste of its food is such that even the master chef would blush, the video trended at number three on YouTube

Talking about the deaths, in the last 24 hours, 488 people succumbed to COVID-19, taking the total death toll to 4,67,468. The last time it was more than this on November 13, 2021 i.e. 13 days ago, when 555 people died in India. It is being told that out of the total deaths in the country yesterday, Kerala (384) had the highest casualties, followed by Maharashtra with 50 deaths.