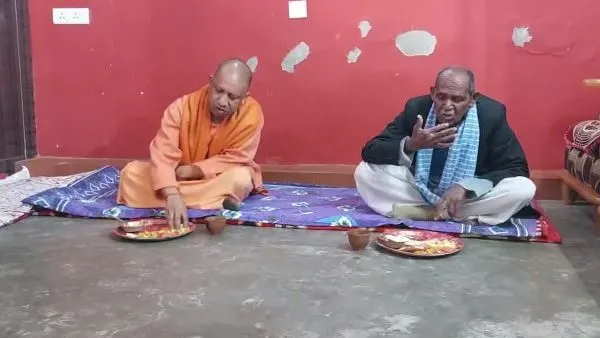 Gorakhpur, January 14. The election bugle of the Uttar Pradesh Legislative Assembly has sounded. With the announcement of the polling dates, all the parties are busy in wooing the voters along with laying the chessboard of the candidates. On Friday, ruling BJP Chief Minister Yogi Adityanath was in his stronghold Gorakhpur, where he went to the party’s Dalit worker’s house and ate food. The Chief Minister, who was on a visit to Gorakhpur, greeted the people on Makar Sankranti and went to the house of party worker Amrutlal Bharti and had food.

There is a tradition of offering Khichdi first to Guru Gorakshanath on Makar Sankranti. Mahant CM Yogi Adityanath only offers khichdi to Guru Gorakshanath. In this connection he came to Gorakhpur. The tradition of eating food at Dalit’s house on the occasion of Makar Sankranti is also going on in the Math for the last several years. In order to fulfill this tradition which has been going on since the time of Guru Mahant Avaidyanath, CM Yogi went to the house of Dalit Amritlal and had food there. CM Yogi thanks Dalit worker for inviting him to eat.

The CM said that egalitarian corruption-free society and good governance is the mission of the BJP, on which the party is moving forward. The Chief Minister also reiterated the work done during his tenure. On the double engine government, he said that the families of UP have also benefited from the schemes of the Center. Said that the people of UP have got the benefit of other schemes including gas cylinder, electricity, Chief Minister Jan Arogya Yojana, Ayushman Bharat Yojana. Free investigation, treatment and ration were arranged for the people even during the Corona period. Under the double dose of double engine government, free ration is being given twice a month.

Big game plan behind fighting Yogi from Ayodhya, what does BJP want to do with this master stroke?

The dates for the Uttar Pradesh assembly elections have been announced. Voting will be held in the state on February 10, February 14, February 20, February 23, February 27, March 3 and March 7. After the counting of votes on February 10, it will be known whether the BJP will return to power this time or not.