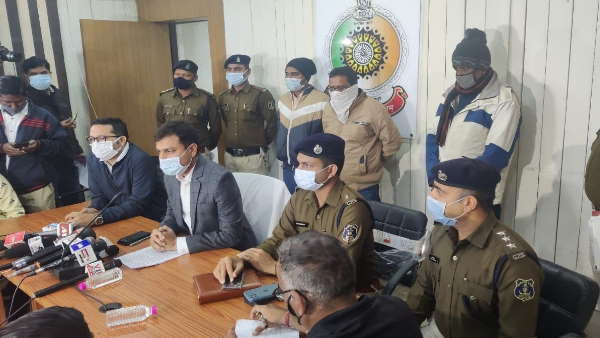 Raipur, 15 January. The alleged diary case of the School Education Department of Chhattisgarh has been exposed in just 48 hours. In the diary case, former District Education Officer of Raipur district GR Chandrakar along with fellow Homeopathy College secretary Sanjay Kumar Thakur and his typist Kapil Kumar have been detained. According to the information, the accused former officer Chandrakar had hatched a complete conspiracy by making a fake diary to remove his personal enmity with other officers of the department. However, the accused have confessed during the interrogation of the police that the diary is completely fake.

It is worth mentioning that on Friday evening, School Education Minister Dr. Prem Sai Singh Tekam had met Chief Minister Bhupesh Baghel and demanded an inquiry into the matter. Immediately after getting instructions from the Chief Minister, Raipur Police arrested the accused in the night itself. Earlier in the diary case, a case was registered against unknown people at Rakhi police station of Nava Raipur on the complaint of senior education department official Ashutosh Chavre. In the diary case, Leader of Opposition of Chhattisgarh Legislative Assembly Dharamlal Kaushik had demanded SIT to investigate the matter by accusing School Education Minister Dr. Premsai Singh Tekam of corruption.

After solving the whole matter, Education Minister Dr. Premsai Singh Tekam issued his statement saying that the professional manner and speed with which the police have arrested the culprits within 48 hours by cracking the fake diary case is praise and congratulations. deserves. Dr. Premsai Singh has said that through this fake diary an attempt was made to defame him, his department and the popular Bhupesh Baghel government of Chhattisgarh, which was unsuccessful.

He has challenged Leader of Opposition Dharamlal Kaushik and asked him to make public the so-called diary, which he had claimed in his statement. After the arrest of the criminals, it is now clear that if Leader of Opposition Dharamlal Kaushik had made such a claim, then he must have been involved with the criminals somewhere. Otherwise why was the knowledge of a coded diary known to him except the accused? Why did he claim that very soon he would make that alleged diary public?