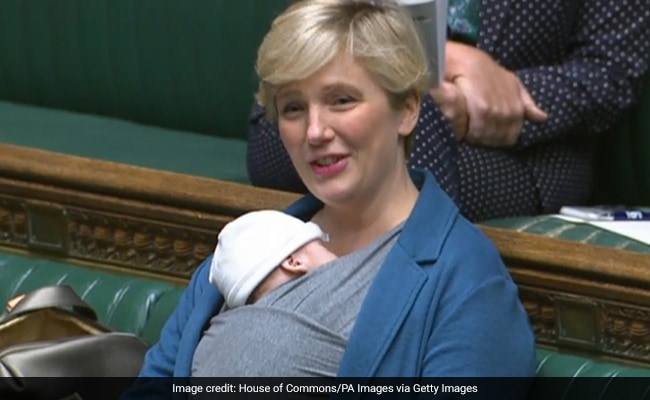 MP Stella Crissy, who came to participate in the debate in the UK Parliament, had arrived with her three-month-old child.

An MP sitting in Parliament can also be a mother, so whether she should bring her child to the House or not has once again become a matter of debate. Recently, in the debate released in the UK Parliament, MP Stella Cressey, who brought her three-month-old child with her, was emailed by an official instructing her not to bring the sleeping child to Parliament. Stella, the leader of the Labor Party, which has campaigned to offer full maternity cover for women lawmakers, was warned Tuesday for participating in a debate with her three-month-old son Pip in her arms. Stella, the MP from London, tweeted an email from a House of Commons official, citing a rule not to bring a child into Parliament that says “you must not take your seat in the Chamber with the child.” needed”.

Physical distance is not enough to stop Kovid: British study

“It seems that mother is neither seen nor heard in this place called the mother of all parliaments,” she complained. House of Commons Speaker Lindsay Hoyle told lawmakers that she was not aware of the officer’s reprimand. However, he insisted, “It is very important that the parents of infants and young children can participate fully in the work of the House.” Stella said she was glad to hear this.

An official spokesperson from Prime Minister Boris Johnson said Johnson supports these reforms but that the decision rests with the House of Commons. Significantly, Johnson’s wife Carrie is going to give birth to a second child soon. “We want the workplace to be modern, flexible, and fit for the 21st century, under any circumstances,” the spokesperson said.

Despite the formal ban, many MPs have been bringing children along in debates for the first time. Former Liberal Democrat leader Joe Swinson first did this in 2018. Labor MP Alex Davis-Jones tweeted that she was also breastfeeding when she was elected in 2019 and that Hoyle had made sure she could feed her baby in the House of Commons or Westminster Hall. Stella still breastfeeds Pip and before that she brought her daughter to Parliament.

Stella told Sky News, “Pip is too young, maybe some of my lawmakers make more noise than him. There are times when you just can’t leave your kid alone.”