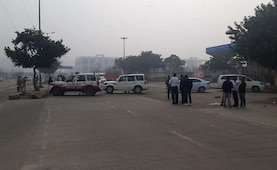 A situation of panic was created on Friday after an unclaimed bag was found in Delhi’s Ghazipur Flower Market. Bomb disposal squad of Delhi Police has reached the spot. Bomb was found in this unclaimed bag, it was defused by controlled blast. According to Delhi Police, explosives and IED were planted inside the bag, which has been defused by control blast by digging a pit in an empty field near Ghazipur vegetable market. . When this action was carried out by the NSG team, that place was completely cordoned off.