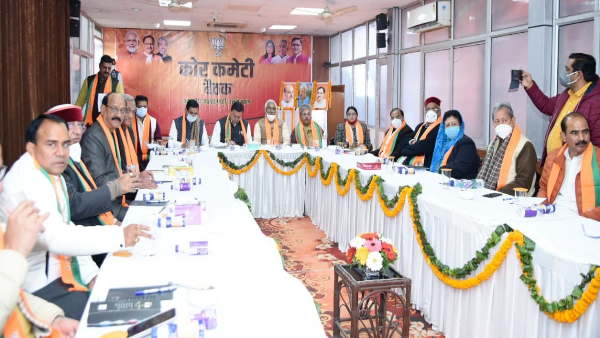 Dehradun, 15 January. After the announcement of election dates in Uttarakhand, BJP, Congress is busy preparing the list of candidates. After churning the names of all 70 candidates, Congress has handed over the list to the high command. In such a situation, the names of 50 seats can be finalized soon. Here on Saturday, a meeting of the BJP Core Group was held in Dehradun, in which the panel has been prepared. Now a panel of all possible names will be sent to the Parliamentary Board. Sources claim that a panel of more than 150 names has been prepared by the BJP core group for 70 seats. In this, an opinion has been formed on more than 25 seats. BJP may announce the names of candidates on January 21. However, the tension of the party has increased due to Harak Singh Rawat not attending the Uttarakhand BJP core group meeting on Saturday.

One opinion on 25 seats, the decision will be taken by the High Command on the rest

BJP, Congress have intensified the process of selection of candidates as soon as the bugle of the assembly elections in Uttarakhand has been sounded. Congress is the frontrunner in this race. The names of 50 seats have also been finalized in the screening committee meeting of Congress in Delhi, which can be announced anytime. BJP’s Uttarakhand Core Group on Saturday brainstormed to prepare panels on all 70 seats. Sources claim that during this time an opinion was seen in more than 25 seats. In which no other claim is strong. However, on these seats too, the party will make a panel and send it to the high command. Apart from this, a panel of contenders has been prepared for other seats. In which strong 3 names have been kept. The biggest problem before the BJP is about the sitting MLAs. Whose survey report is not correct. Due to the discussion of ticket cut of these MLAs, pressure has started building on the organization too. In such a situation, after the discussion on these seats in the core group meeting, the name will be sent to the high command.

Harak Singh Rawat did not reach, then speculation started

All senior BJP leaders were present in the BJP Core Group meeting held in Dehradun on Saturday, but once again the news of Harak Singh’s displeasure started coming to the fore in the political corridors after Harak Singh Rawat was not present in the meeting. Party sources claim that Harak Singh could not be contacted. But the absence of Harak Singh in the core group meeting raises many questions. In such a situation, it is also being speculated that Harak Singh has received signals from the high command. Due to which he now avoided the meeting of the party core group. After the controversy over Harak Singh’s Lansdowne seat, there have been signs of rebellion within the party. In such a situation, the party high command will take every decision after careful consideration. For this, all other camps including Harak Singh will also be satisfied. BJP sources also claim that BJP can announce candidates for all 70 seats simultaneously. Which is possible around 21st January.

BJP’s panel ready in Uttarakhand, final seal will be on the winning candidate in Delhi