Targeting the BJP governments at the Center and Madhya Pradesh, Rahul Gandhi claimed that farmers were not getting fertilizers and were being harassed for not repaying loans ranging from Rs 50,000 to Rs 1 lakh. 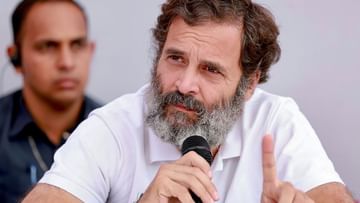 Congress leader Rahul Gandhi said that the people of BJP (Bharatiya Janata Party) and RSS (Rashtriya Swayamsevak Sangh) do not live their life like Lord Ram. They India Jodo Yatra Quoting a conversation he had with a priest at a rally here during, he said that the phrase Hey Ram used by Mahatma Gandhi is the way of life. Gandhi’s Bharat Jodo Yatra is currently passing through Madhya Pradesh and stopped at Agar Malwa district on Friday evening.

He said, O Ram, this is the way of life. It taught the whole world the meaning of love, brotherhood, respect and penance. Similarly, Jai Siya Ram means, Sita and Ram are one and Lord Ram fought for the honor of Sita. Jai Shri Ram means Hail Lord Ram, but BJP and RSS people are not living life like him (Lord Ram) and are not fighting for the respect of women.

Prime Minister Narendra Modi on Thursday targeted the Congress, saying that those who never believed in the existence of Lord Ram, have now brought Ravana to abuse him. Modi was referring to Congress President Mallikarjun Kharge’s remark that the Prime Minister asks people to show their faces to vote in all elections. Kharge asked, are you like Ravana with 100 heads.

Farmers are not getting fertilizers – Rahul Gandhi

Meanwhile, targeting the BJP governments at the Center and Madhya Pradesh, Rahul Gandhi claimed that farmers were not getting fertilizers and were being harassed for not repaying loans ranging from Rs 50,000 to Rs 1 lakh. Large loans of industrialists are waived off by banks by rolling out the red carpet. The Congress leader said parents take education loans to make their son an engineer, but after graduation, young engineers are forced to work as laborers for want of jobs.

Lord Ram’s name is incomplete without Sita – he is only one that’s why we say ‘Jai Siyaram’.

Gandhi said that small shops and establishments were the biggest source of employment, but they have been badly affected by the Gross Domestic Product (GST) and demonetisation. The Congress leader said that a major source of employment was Public Sector Undertakings (PSUs), but they are also being closed and even hospitals and schools are being privatised, thus ending all job opportunities. are.

Referring to inflation, he said that during the previous United Progressive Alliance (UPA) government, the price of petrol was Rs 60 per liter but now it is Rs 107 per litre. The price of LPG cylinder was Rs 400, now it is more than Rs 1,000. He said that money is being taken out of the pockets of common people and given to industrialists, as a result of which there are now two classes in the country, one class is of billionaire industrialists and the other class is farmers, laborers and small shopkeepers. Gandhi said that people do not want this situation, people want justice and providing justice to them is the main objective of Bharat Jodo Yatra.

Now people of 18 years and above will get nasal vaccine, DGCI approves emergency use