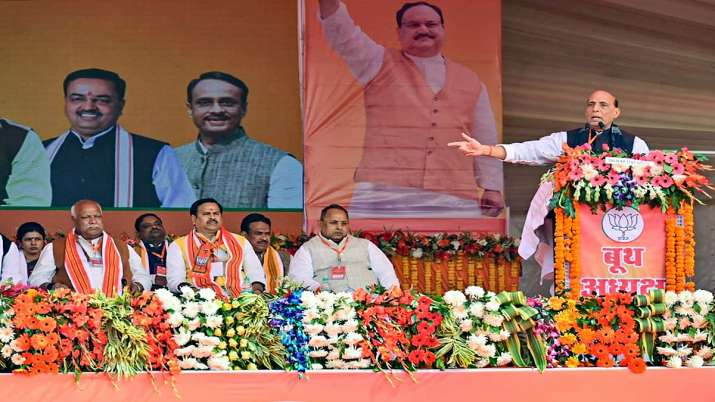 Sitapur (UP): Defense Minister Rajnath Singh said here on Thursday that Prime Minister Narendra Modi withdrew three agriculture laws as the BJP is very sensitive towards farmers. Addressing the convention of booth presidents of the Awadh region of the Bharatiya Janata Party (BJP), Singh said, “Our party has always been sensitive towards farmers, so our Prime Minister has withdrawn the agriculture laws. Our party has never been Congress. And like the Samajwadi Party, can’t fire bullets at farmers and Ram Bhakts.”

Attacking the Samajwadi Party (SP), Rajnath Singh said that it believes in divisive politics as their leaders talk about Jinnah who was responsible for the partition of the country. He said that even the Muslim society condemned the Samajwadi Party for this. Terming the SP’s rule as a government of goons and mafia, he said that today on hearing the name of Yogi, the beats of goons and mafia intensify, this is the law and order situation of Uttar Pradesh.

Referring to a viral picture of Prime Minister Narendra Modi walking with his hand on Chief Minister Yogi Adityanath’s shoulder, Singh said, “It seemed that the Prime Minister was whispering in Yogi’s ear that “Just keep on batting Yogiji and keep on batting”. BJP’s victory will be assured.” “The BJP wants to form the government for the country and not for the pleasures of power. Our party is the largest party in the world because of dedicated workers like you,” he said.

“Our party does not make false promises like other political parties, even our election manifesto is free from false claims, so I say the party does what it says,” Singh said. There are medical colleges in about 37 districts of the state which are either operational or under construction. He assured that soon every district will have its own medical college. The former BJP President said that the way Chief Minister Yogi Adityanath handled the situation of Kovid in Uttar Pradesh, it is exemplary. He said that the Yogi government has done a good job in payment and procurement of sugarcane farmers, they have made record purchases from them.