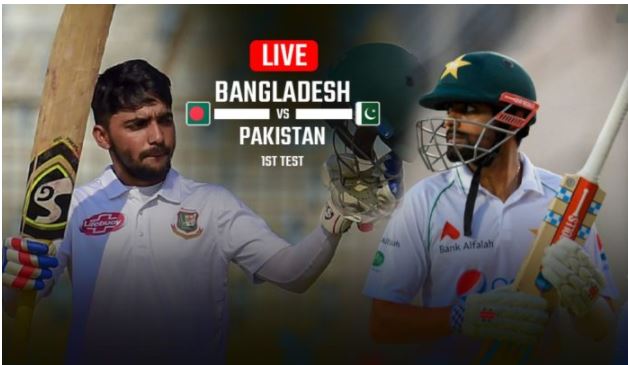 BAN vs PAK LIVE Score: Bangladesh team won the toss and decided to bat in the first match of the two-match Test series. Bangladesh will look to put behind a poor performance in the recent Twenty20 series and look to do well against Pakistan in the two-Test series starting Friday.

In the Test series, however, he will miss his senior players, including top all-rounder Shakib Al Hasan. Shakib has not been able to recover in time from a hamstring injury sustained during the T20 World Cup. Opener Tamim Iqbal has decided to pull out of the series due to injury and Mahmudullah, who scored an unbeaten 150 in Bangladesh’s last Test against Zimbabwe, has retired from the format.

Both teams for the first test match

Captain Mominul Haque said the young players in the team are full of inspiration to replace the senior cricketers. “We have to play with the players we have available with us. ,

Mominul said, “There is no point in thinking about who is a team and who is not. These senior players have contributed a lot to Bangladesh cricket. But life goes on. ,

Bangladesh suffered a 0-3 loss to Pakistan in the T20I series that ended on Monday, having lost eight matches in a row in T20Is.

“I don’t think the T20 record will have any negative impact in this format because it’s a completely different format. In Test cricket you have to be consistent. ,

But Bangladesh’s Test record this year is also not good. They had lost two home Tests against West Indies. They lost the two-Test series in Sri Lanka 0–1 and then beat Zimbabwe by 220 runs.

At the same time, the Pakistani team will be full of confidence before the Test series. Pakistan played out a draw with the West Indies after series wins over South Africa and Zimbabwe at home, the first series in the new cycle of the World Test Championship.

Captain Babar Azam, however, cautioned his team from getting complacent. “The only difference is that this is their home series and we can’t take them lightly. ,

Babar had said something similar before the T20 series as well. “It is true that their team is young but they are playing in their home conditions. They can create trouble for us that we need to keep focused. ,

Greg Chappell praised MS Dhoni, said – he is one of the fastest cricket minds