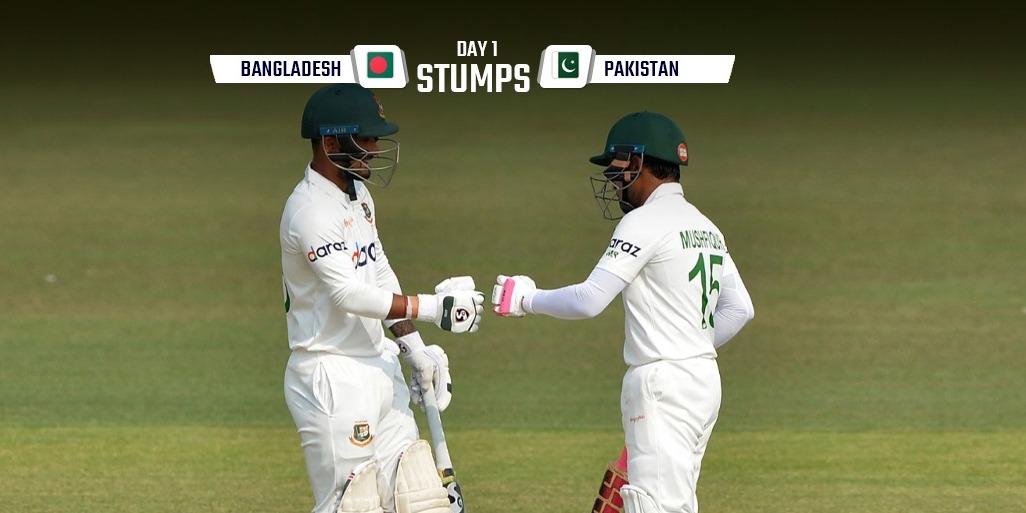 BAN vs PAK 1st Test Day 1, Bangladesh vs Pakistan, BAN vs PAK 1st Test: Bangladesh team won the toss and decided to bat in the first match of the two-match Test series. On the first day of the match on Friday, Bangladesh scored 253 runs for four wickets till the end of the game. Liton Das is unbeaten on 113 and Mushfiqur Rahim is unbeaten on 82. Shaheen Afridi, Sajid Khan, Faheem Ashraf and Hasan Ali took one wicket each for Pakistan. Keep reading for the latest sports news English.InsideSport.IN

Here is the playing-11 of both the teams

BAN vs PAK 1st Test Day 1, Bangladesh vs Pakistan, BAN vs PAK 1st Test: Bangladesh suffered a 0-3 loss to Pakistan in the T20I series that ended on Monday, losing eight matches in a row in T20Is. Bangladesh’s Test record this year is also not good. They had lost two home Tests against West Indies. They lost the two-Test series in Sri Lanka 0–1 and then beat Zimbabwe by 220 runs.

BAN vs PAK 1st Test Day 1, Bangladesh vs Pakistan, BAN vs PAK 1st Test: At the same time, the Pakistani team is full of confidence from the Test series. Pakistan played out a draw against West Indies, the first series in the new cycle of the World Test Championship, after winning series against South Africa and Zimbabwe at home.