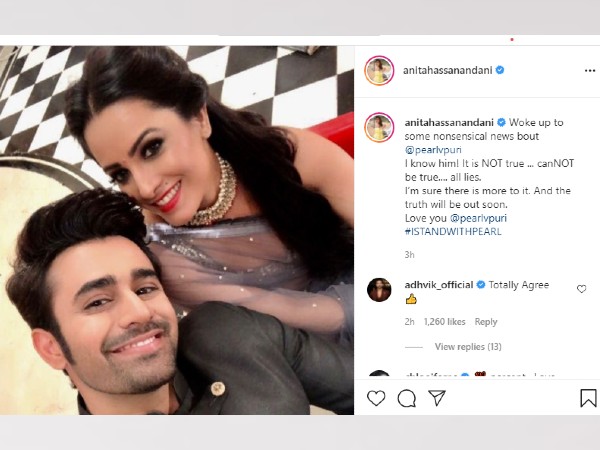 Naagin 3 actor Pearl V Puri was arrested on Saturday for raping a minor. It is being told that Pearl V Puri has been released on bail. But Pearl is getting support from the TV industry. Now Yeh Hai Mohabbatein fame and Naagin actress Anita Hassanandani also got Pearl’s support.

Pearl’s costar Anita Hassanandani wrote on Instagram that she has been hearing rubbish news about the actor. She knows him very well and he cannot do anything like this, it is all a lie, it is not true at all. The whole truth will come out soon, there must be something else in it. Love you Pearl V Puri.

Not only this, Anita trended on I Stand with Pearl hashtag. After which he also got the support of many fans and stars. Naagin actress Surbhi Jyoti also commented on Anita’s post and wrote that she is also with Pearl.

At the same time, Ekta Kapoor, who made Naagin, also wrote a long post in support of Pearl. He denied the allegations against Pearl. Said that even the girl’s mother herself has not said so.

Ekta Kapoor, Nia Sharma, Ali Goni and other actors came in support of Pearl V Puri – said, ‘the allegation of rape is false’

what is the matter
Pearl was arrested late on 4 June for raping a minor. Apart from Pearl, five other accused were also arrested. But there were also reports of Pearl leaving on bail.

Ajay Devgan posted a bang video for the soldiers, gave such a tribute!

Ajay Devgan posted a bang video for the soldiers, gave such a tribute!

Will Jethalal be able to win the boat race?

Good News: DRDO drug 2-DG to be launched on Monday, corona patients will work in...