HomeNational NewsAmazing is this scooty madam, the school which the government was closing,...
National News

Amazing is this scooty madam, the school which the government was closing, made it alive 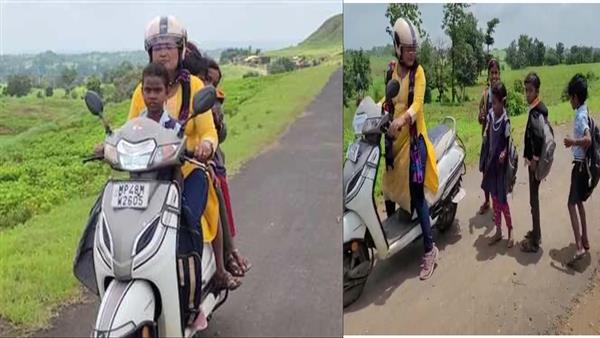 Who is Aruna Mahale?

The name of this teacher living in Betul district is Aruna Mahale. They do not have any children. The Dhudiya village of Bhainsdehi is far from the city. Where is their posting? The way to reach the school is very inaccessible, that every day the good and the good lose their sweat in reaching on time. But for them, school is equally important like home and family. It doesn’t even take a break from school unless some difficult situation arises.

There was a school, but no children studying in it

When Aruna joined the school here, there were children studying counting only for name sake. As time passed, gradually the number of those children declined further. The biggest reason for this was the distance of the village from the school and the poor road of movement. Neither the children liked going to school two kilometers away from the village, nor did their parents want their child to go to school in such trouble.

Time passed. When the school became deserted without children, then Aruna did that work, which no one can think of. With her scooty, she started taking the children from home to school. In the beginning, as many as three to four children were made in Scooty, she used to take them to school. Seeing the scooty madam, other people of the village were attracted and they too slowly agreed to send the children with madam. Aruna would leave the house early for this and then started making three-four rounds to take the children of the village to the school.

Aruna’s thinking and hard work paid off. She today takes up the responsibility of bringing about 20 children from their homes to school everyday, back home. For the villagers whose children go to school with this teacher, Aruna is no less than an angel. Aruna tells that the government had taken the decision to close this school due to lack of children, today the desolation of this school is ending. Due to Aruna’s hard work, the number of children has reached close to 100. Now this teacher has become known in the village as ‘Scooty Wali Madam’.

Aruna considers these children as her son and daughter

Aruna, who became an inspiration to others, says that even though she does not have children, her family is complete in the work God chose her for. She has started considering the children studying in the school as her children. Like real sons and daughters, there is no hesitation in making up for the shortcomings of these children. If a child has any need related to education, he buys it the next day. Today, in the village near the school, when the children’s desire to study increased, they have also hired a guest teacher. She gives her salary from herself.